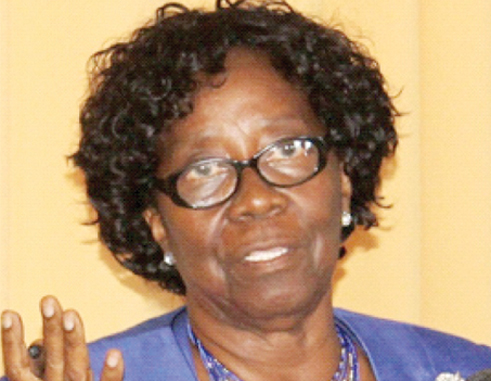 GOVERNOR-General and Chairman of the Nobel Laureate Week Committee, Dame PearletteLouisy, is appealing to Saint Lucians to embrace the spirit of excellence demonstrated by the island’s two Nobel Prize-winners, Sir Arthur Lewis and Derek Walcott.

While that appeal coming from Dame Pearlette is nothing new, she said the fact that this year marks the centenary of the birth of Sir Arthur gives special rise to the occasion. The theme for this year’s Nobel Laureate Week is “Celebrating Excellence: National Initiatives, Global Perspectives” and the Governor-General said the theme “calls for our national initiatives and homegrown ideas, experiences and achievements to be of such a quality that they can be emulated by the wider international community.”

“So it is a national initiative but we want to sell it to the broader international community,” Dame Pearlette said at a press launch for Nobel Laureate Week held at Government House yesterday. “It is also an appreciation of the fact that when we do whatever we do locally, (that) we have in mind the broader international market in mind. It is a call also to resist being too parochial and insular to do things – at least for our Nobel Laureate Week activities and things that we want to celebrate – not just simply for local consumption.”

According to Dame Pearlette, cognizance must be given to the broader international community whenever the developing, implementing and executing national initiatives are done at the national level. She challenged Saint Lucians to set a high standard for charting the nation’s development.

“We must also realize that what we do at home can be influenced hopefully positively by what is happening outside because we are not in our own little bubble here but it is the global perspective that we want to outline, highlight and hope that we can sell ourselves as our two Nobel Laureates obviously have done,” Dame Pearlette explained.

Over the years, the Nobel Laureate Week Committee has lamented the cold response it receives especially from the corporate sector to be able to stage the various events on the NLW’s calendar. Dame Pearlette said she wrote to key private sector companies around October last year asking them to find some way to recognize and celebrate Sir Arthur’s milestone. The response from those companies thus far, she said, has been “less than encouraging”. Meanwhile, First Citizens Investment Services and the Saint Lucia National Commission for UNESCO made financial contributions to the NLW Committee at yesterday’s press launch.

As for the contributions the two laureates have made to especially Saint Lucia through their achievement of excellence, Dame Pearlette cited Sir Arthur as an example to illustrate her point. She said that while many people continue to debate the positive impact Sir Arthur’s and Walcott’s achievements have had for Saint Lucia, their works stand as proof to the world. While many people continue to extol the fact that Saint Lucia has the highest number of Nobel Prize-winners per capita, Dame Pearlette said, they need to accept and embrace that Sir Arthur and Walcott came from among us.

“You may have asked that question in 1979 when he was awarded the Nobel Prize or perhaps even as people did when he visited Saint Lucia about 25 years ago. But anybody who says that now has had his or her head in the sand for a while. So I’m saying if you don’t know what he did, now is the time to know,” Dame Pearlette said.