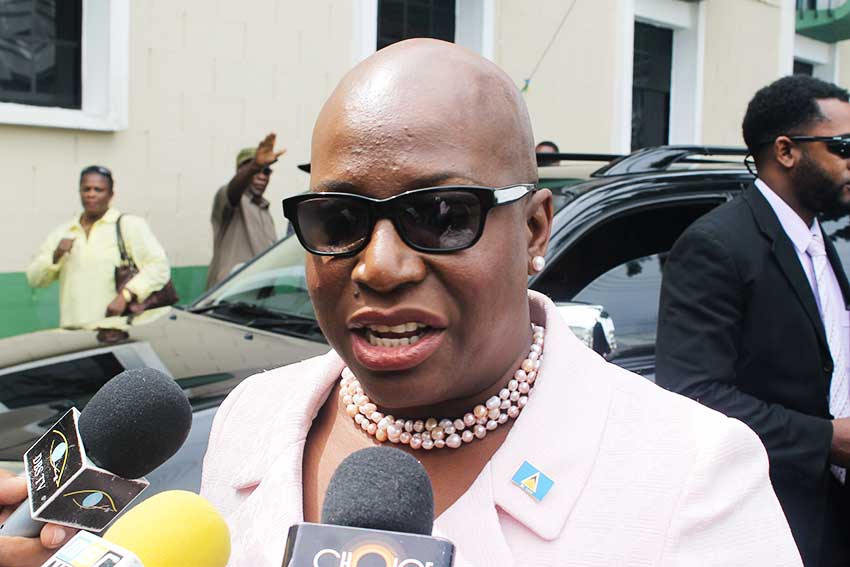 MINISTER for Education, Dr. Gale Rigobert, says there has been a remarkable drop in the number of students in schools.

That was her response when this reporter asked her how she plans to deal with the issue of dwindling school numbers as shown in the Education Digest and based on the article entitled “The Universal Secondary Education Conundrum”, published in The VOICE recently.

Highlighting the drastic annual fall of student enrolment numbers, she stated that: “In some instances, we have enrolment dropping from 300-350 to a little over 100.”

In pointing out schools in which the enrolment drops are that severe, she asked rhetorically: “Good sense would suggest that where that is the case, do you continue to operate the plant as if it had that full cohort of 300-plus students?”

She immediately followed this up with yet another rhetorical question: “Where schools happen to be in close proximity to one another, do you plough already limited resources into maintaining an efficient operation in both or do you — where feasible — ensure that they can marry resources so that it can enhance the product offering and give our students the best opportunity for an education experience that is enjoyable, that is fun but also seeks to develop their divinely given skills and talents?”

Answering her own question, Dr. Rigobert stated that even though “for many people, it is a difficult political decision”, “for me it is an economic necessity, one; and two, it is in keeping with our thrust to provide a safe and child friendly learning environment.”

Expanding on her point about the economic necessity to marry resources where declining student enrolment numbers are concerned, the Education Minister asked rhetorically once more: “Even as we speak of ailing schools in terms of deteriorating physical infrastructure, does it not make better sense to identify areas in which we can realise savings and or ensure that monies spent are best spent and can have the kind of impact we anticipate?”

She then earmarked school mergers, where necessary, as the way forward in dealing with the current enrolment reality.

“In that regard, we continue to engage stakeholders in areas…where mergers are possible; given perhaps, one, declining student enrolment; two, aging infrastructure that would require a massive injection of finance to bring the infrastructural condition of the school up to par; and three, with respect to exposing students to a wider variety of subjects. So all of these considerations have led us to embark upon a process of engagement and consultation with a view to where possible, initiating mergers.”

Regarding the potential impact this student enrolment decline may have on the teaching profession, and the possibility of teachers being sent home, Dr. Rigobert dismissed such talk as “misinformation”.

She pointed to the merging of the John Odlum and George Charles secondary schools as an example of how the Ministry of Education plans to continue to deal with the student decline.

“Naturally, (the Ministry of Education) would have taken all of these into consideration and that is why, as the example of John Odlum and George Charles would show, the outcome was really the result of much engagement; and I must emphasize… (that) the parents, teachers and students were all engaged in designing the uniform, (and) determining what subjects would be on offer. It was really coming out of the people.”

She said that engagement and consultation will be key to dealing with the anxiety and doubt that come with changes like the need for school mergers in the light of dwindling school enrolments.

“That is why when I asked my team to engage the stakeholders I insisted: engage, engage, engage. Consult, consult, consult. Because we recognise that with any experience of change, naturally there’ll be some anxiety. (There’ll be) some doubt, some trepidation; but the truth is (with) this process of consultation and engagement, you can correct and cure some of those anxieties and put to rest the misinformation in circulation,” the Education Minister explained.

She continued: “The safety of our kids remains a priority. The need to provide a safe, child-friendly environment remains a priority. We all saw need to ensure that our students receive an education which is fit for purpose in the 21st century. Our teachers are given an opportunity to give the best of themselves. So all of these considerations together would lead us to provide the best solution to the problems that we know beset the education sector.”

When was asked why there has been an annual increase in monies spent on education, through successive administrations, in the face of the drastic drop in school enrolments, she stated that: “I cannot speak for what my predecessors would have done, but this Minister recognises that with a drop in enrolment and with the increase in cost in school maintenance and the need to provide an adequate education experience for our kids, that there are some tough decisions that are to be made and must be made and we are prepared to make those decisions.”

The Student Digest does show that in the academic year 2006/2007, when there were 14,578 students enrolled at secondary schools across the island, $39.3 million was spent on education. Ten years later, the education expenditure for the 2016/2017 academic year, where only 11,794 students were enrolled, was $68 million, almost double the 2006/2007 expenditure, when there were more students enrolled.