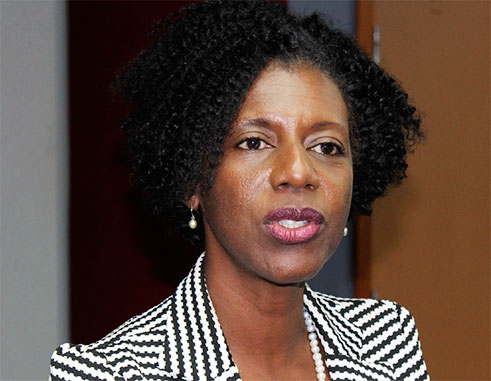 A workshop entitled “Our Children, Our Media”, hosted by the Human Services Department and UNICEF at the Finance Administrative Centre last Thursday evening, focused on sensitizing media personnel on news coverage of children.

Communications Development Specialist with the UNICEF Office from Barbados and Eastern Caribbean, Lisa McClean-Trotman, conducted the workshop, which was one rife with questions by the many media personnel present. The meat of McClean-Trotman’s presentation was the necessity to withhold certain bits of information from news reports which could potentially be harmful to the children being covered.

However, some of the media members repeatedly gave scenarios which they felt would be problematic to cover in the way McClean-Trotman was instructing, and so oftentimes asked her to explain how a media personality would have to cover a story in the child protective way.

Asked why the workshop was conducted, McClean-Trotman said that UNICEF wanted to “remind journalists of the need to…take the best interest of the child in the long-term and in the short-term when they’re covering stories pertaining to them” in order to “make certain that there’s no further stigmatization, nor victimization, nor reprisals or any factors that…lead to irresponsible reporting.”

She also stated that: “We wanted to make certain that children in need of special protection, such as children in conflict with the law, children who’ve been abused, children in foster care…are protected at all costs.”

When asked how receptive she thought the media members present were to her presentation, McClean-Trotman stated that: “I think the participants were extremely receptive.”

She went on to say that she thought that the session was very informative for her — both professionally and personally — and that “it gave me a better understanding and feel of issues that media practitioners have to deal with.” Overall, she said that the session yielded “great interaction, good ideas (and) suggestions.”

Pointing out some of the more common errors in child coverage the media make, she focused on the information media tends to put in stories, which leads to the identification of a child, which, she said, is potentially harmful to the children covered.

“Identifying primarily perpetrators, without realizing that it can also identify children; putting in different identifiers such as the name of schools, the form that a child may be in…the names of the parents…Those were some identifiers that I think we don’t think about.”

Elaborating on her abovementioned points, she stated that sometimes the media think that once they do not show the child’s face, their job is done in protecting the child’s identity. However, she said that there are other bits of information which could be identifiers as well.

“We often just think about not naming the child, obscuring the child’s face, (without) realizing that there are other identifiers that can also identify the child. And I think those are some of the no-no’s that I’d really like to get home today,” McClean-Trotman said.

“Sometimes you don’t even know…the person (on social media) that is actually putting news stories out but the important thing is that traditional media need to set standards,” she stated.

She also said that it’s important that the mainstream media “don’t follow in the direction (of) those online media (outlets) who may be operating irresponsibly.”

When asked what role UNICEF plays in hosting these workshops, she stated that the organization has been supporting child protection agencies to host workshops on cyber-abuse and cyber-bullying, where it uses different strategies to reach children and educate them about responsible use of social media.

In responding to whether or not there are any plans to bring such discussions to policymakers, she said: “I think that is the next step.”

Describing UNICEF’s work with the Human Services Department, McClean-Trotman said that in order for societal change of behaviour to occur, “you need changes at all levels.”

“So it’s not just at the individual level,” she stated. “You also need the policy environment to change: that has to be the next step…because it needs to be done simultaneously.”

Stressing on the need for the change to occur simultaneously in order for it to be effective, she concluded that “the discussion needs to happen at all levels (in order) to ensure that the policy environment is there to support anything that we’re asking media houses or individuals or parents (to do).”