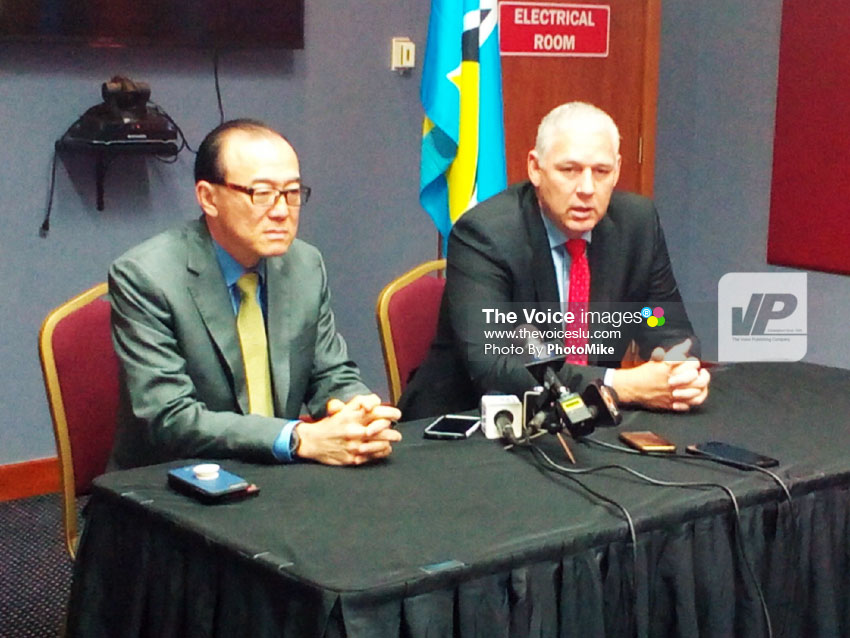 WORK has recommenced on the horse racing track in Beausejour, Vieux Fort after a hiatus of several months and could very well end in October.

The announcement was made this week by Prime Minister Allen Chastanet and Teo Ah Khing, Chairman of Desert Star Holdings (DSH), the company that inked a deal with the Government of St. Lucia for developments in the south of the island costing some US$2.6 billion.

The development, called the “Pearl of the Caribbean”, has several phases with the first one being the horse racing track.

Opposition to the development has been swift and fierce over the past year and a half, led by the opposition St. Lucia labour Party and a group of people in the south called the Vieux Fort Concerned Citizens Coalition for Change, which had called on government to renegotiate the deal it signed with DSH.

The horse racing track had not been spared in the discussions and debates that followed the signing of the deal with its detractors questioning, among other things, the amount of land designated to accommodate all that is required for a horse racing track of the type to be built in Beausejour.

Aside from the negative publicity, the site for the track featured in a news article when a grader on the site was set alight. The United Workers Party, in a press release last month, said the work was that of an arsonist. However, that has yet to be substantiated either by the police or the fire department.

This, though, was not the reason for months of inactivity on the site. A primary reason had to do with a section of the land being in dispute. That land, which is owned by Invest St. Lucia, was leased to an individual who was not inclined to give it up willingly, forcing government to acquire it compulsorily.

With that formality now out of the way, work has restarted with some amendments, according to the Prime Minister, who said that the design will be refined as work progresses. He said the horse track will be identical to that of Gulfstream Park, a North America premier thoroughbred horse racing destination.

Chairman of DSH, Teo Ah Khing, said that, weather permitting and with no hiccups, the track should be completed by October of this year or within six months.

“(The track) will be very similar to what we have seen in Gulfstream, Miami. This track is a world-standard track right now,” he said.

According to him, it is a place where locals can race their horses as well. The track, he said, will position St. Lucia as a world-class destination and bring employment to the country.

Two hundred horses are being targeted for the inaugural race at the track for which a date has not yet been fixed, although there is a view that it could take place by year-end. The horse droppings, he said, will be used as fertilizers as well as for compost around the track.

The DSH Chairman said his company has already committed over US$10 million towards the cost of the track. This amount, he said, will increase as facilities are built around the track, like barns, for example.

Ah Khing cannot complain about the money he will spend on the facility as he is set to gain all of it back, according to Chastanet. The Prime Minister, when questioned by this reporter, said the money spent by DSH on the horse track, including the stables and other supporting facilities, will be reimbursed to DSH through the Citizen by Investment Programme (CIP).

“We will have a quantity surveyor determine how much money is actually spent on the horse racing track, which to us are also the stables. Those monies will then be reimbursed through the CIP in which they (DSH) are responsible for marketing the CIP. Once the track is paid for, we will then take back ownership of the land and so no longer will there be a lease,” Chastanet said.

However, St. Lucia holding ownership to the horse racing facility does not mean that St. Lucians will be the ones managing it. Chastanet said the China Horse Club will be contracted to manage and operate the facility. He said the purpose of the lease was in order to give the developers collateral since they were putting forward the money to build the horse racing facility.

But why would the government buy a horse racing facility that the Prime Minister has repeatedly said is not profit-generating? And what really is Ah King risking as an investor if he will be receiving all of the money he spends in the first phase of the project?

“So there is a format that we have devised in which they (presumably DSH) will go out and promote the CIP,” Chastanet said. “The funds will come in and there will be a shared amount on that money. The share amount to them will continue until we pay back the horse racing track. The horse racing track is not a business entity. What it is is a facilitator: the cheese that creates the excitement and attraction. The money is not in the track, it is in all the other activities generated around the track,” Chastanet explained.

Chastanet reiterated that the reimbursement is only for the track and the stables, and that the hotel and whatever else to be built under the development programme for the south will apply independently of the CIP. He made it clear that the lands for commercial activities will be sold.