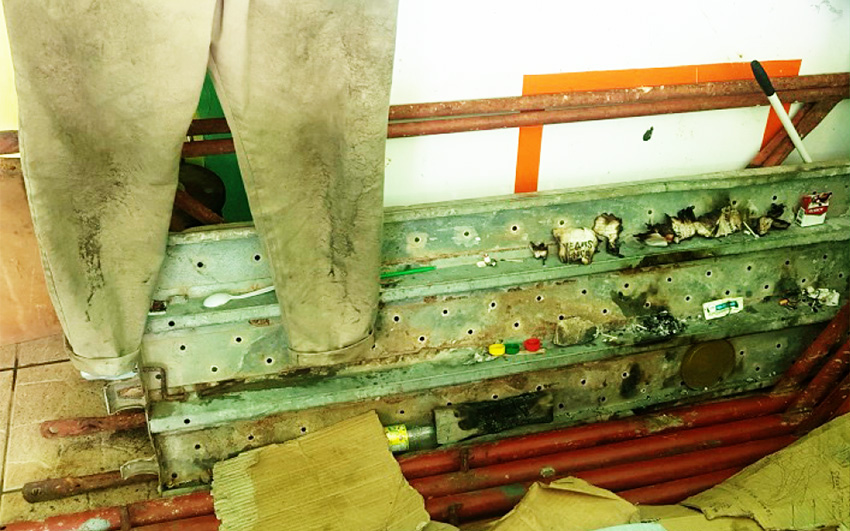 I call him ‘Mr. Booster’ for now, but he is a former teacher at a well-known secondary school on the island which has produced a number of national sportsmen and sportswomen — individuals who brought us joy in our hearts and smiles on our faces.

By all reports, Mr. Booster is a former basketball player and frequents the Kenneth ‘Wriggler’ King Multipurpose Sports Complex at the George V Park (The Gardens) — and based on what I saw in a section of the pavilion which also houses an office for Tiger In FLOW Tennis Academy, the word ‘frequent’ is an understatement because Mr. Booster actually lives there.

Some homeless stories (personally for me) start simple; hard times because of job loss, a major medical bill, fire or plain inability to resist drugs/ alcohol or otherwise. Mr. Booster is among the more than 300 accounted for homeless in Saint Lucia and within the 10 Districts, the City of Castries is in the lead.

In the real world, this could happen to anybody, as nobody knows where he/she will end up but as long as you are living anything could happen.

It is not clear as to how long Mr. Booster has been living at the facility, which was donated by Taiwan on Monday 22nd December 2010, to the People of Central Castries. At the time of the handshakes and thank you messages, present were then Prime Minister Stephenson King, and most of us would remember Ambassador Tom Chou — and the Parliamentary Representative at the time was Richard Fredrick and Lenard Montoute the Sports Minister.

For some who do not know or remember, this revamped Multi-Purpose Sports Complex was named in honour of the late Kenneth “Wriggler” King, who was a pioneer and a driving force in sports and cost $1.2 million upon completion.

As stated above, Mr. Booster is a former basketball player, and is still very energetic, running up and about on the basketball court on a daily basis.

At the recently-held Voyager Tennis Open, on Day One of the championship, there was a strong smell of marijuana in the air and with a number of people standing in the vicinity they were turning around to see who the culprit was. To their disappointment, no one could be seen. Looking over a small counter-top, there was indeed someone smoking: Mr. Booster was lying and relaxing on a make- shift bed made out of layers of cardboard for comfort taking his puff and not too long after he left his comfort zone, in that small area I saw a cup, a plastic plate, a spoon, an open Bible (not sure what chapter he was reading, but I was not interested in it anyway…) and one dirty trousers. He did not care if Friday falls on a Wednesday. For him, such is life — and life goes on.

My biggest concern was the amount of burnt pieces of cardboard that I saw near his make-shift bed — aa disaster waiting to happen. Many homes have gone up in flames after a smoke or drink, after the individuals fall asleep — and the rest is history. (I guess when we get things for free, we really don’t give a damn as to how to care for it — and that includes security and proper maintenance…

It was only recently there was a major fire in Rose Hill/Castries where a number of families lost their homes and personal belongings. Should we give this place a blind eye? God forbid that one day in the wee hours of the morning one would alert/call the Saint Lucia Fire Service informing that there is a fire at the Kenneth ‘Wriggler’ King Multi-Purpose Court.

So what are the authorities doing? Should we leave it and thus allow Mr. Booster bits of lighted paper to burn it to the ground, it’s only a question.

While politicians keep talking and pulling here and there in a tug o war, there are major social issues to deal with, but they seem to be giving it a blind eye.

So after 39 years and 334 days of Independence and on the verge of Fair Helen celebrating its 40th anniversary does it really worth it as an independent country, are we really free from bondage?

I simply hope those in authority can have a bird’s eye view of the above mentioned facility, and by the way if in any way you forget where its located, its George V Park, (The Gardens). You cannot have people’s children playing in such condition.

The condition I just spoke about is not all, but if you have a good sense of humor, that’s for you. There is nowhere else in the world, where you will see branches of an almond tree hanging over a tennis court, except in Fair Helen. The list goes on, but that’s for another Sportlight.