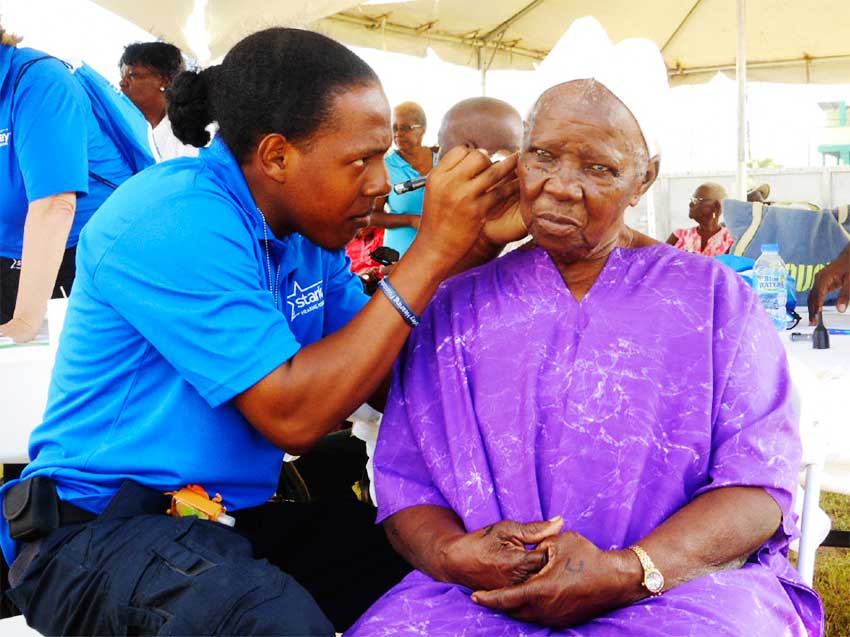 HUNDREDS of St. Lucians converged at Phillip Marcellin Grounds in Vieux Fort on Wednesday and Thursday to have their ears tested by a team from the Starkey Foundation.

The event, a collaboration between the Foundation and the Ministry of Health, attracted close to 300 patients on the first day.

The Foundation, which has been providing hearing care services since 1984, provides such services in six regions.

According to Kirk Richards, Internal Development Director for the Caribbean, the Foundation was satisfied with the public participation in the event.

“We have identified participants who need hearing aids. We are getting their ears checked and cleaned and doing their ear impression …to create custom ear moulds,” Richards said.

He said the custom ear mould and hearing aids to go with the mould, along with batteries for hearing aids, will be provided to them in April, when the Starkey Foundation will be back on island. He said the batteries will last for two to three months.

Richards said the patients will be coming back for phase 3 of the project which will be the after-care programme.

“They will be trained in the entire programme as it relates to taking care of the ear,” he said.

The patients have all expressed satisfaction with the programme, which they say is of great help to them, both financially and health-wise.

Camille Mangroo said her mother had her ear tested and it has brought them much relief. She said her mother has been using one hearing aid for a while, but by making use of the services of the Starkey Foundation, she will now have another one at no cost.

“This is a very good initiative. I appreciate it,” Mangroo told this reporter.

She added: “I think the schoolchildren should be encouraged to make use of such an important service. They should have been here today.”

Mangroo said she hopes that the event will be a continuous one because of its importance to the country.

“This is very good,” her mother added.

Fred Peter, another patient, said: “This is a good thing for the community. It’s wonderful.”