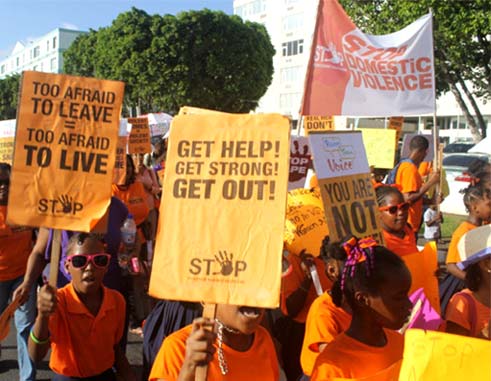 Sponsored
Share this post:
WHILE the police and social agencies continue to pledge their support in stamping out violence against women and children, criticisms continued to be showered on them for not doing enough.

Last Wednesday, a renewed call for more emphasis to be put on and resources made available to stemming the scourge was made when advocacy group, Raise Your Voice Saint Lucia, organized a protest march.

The march began around 3:30 p.m. from Serenity Park where scores of adults and schoolchildren dressed in tee shirts with anti-violence slogans and carrying placards marched in solidarity for an end to violence against women and children.

Incidentally, the protest march coincided with last Wednesday being observed as the International Day for the Elimination of Violence Against Women.

The chants were clear as the marchers made their way past the Castries Waterfront into downtown Castries: “Women are special”, “Real men don’t rape” and “We need respect.”

Chairperson of CAFRA, Flavia Cherry, said the march was important, adding that she was pleased that more people are coming forward to call attention to the issue of violence against women. In light of the recent spate of rapes that have dominated the national news headlines, Cherry believes the inclusion of children in the march sends a positive message.

“What I also find very encouraging was the number of young children participating in the march,” Cherry told The VOICE. “I think it’s very important for us to sensitize children, especially young boys, to make them understand that they need to respect women.”

Cherry said that while there are several things in place, such as institutions and laws, to deal with the issues of violence and rape, the problem lies in enforcement, which is often lacking. The handling of cases in an untimely manner, she said, is also posing a problem because whenever there are long delays within the court system it affects victims.

“Sometimes it’s like a denial of justice because so much time passes within which the victim feels like she’s being victimized again,” Cherry lamented. “So we need more commitment from all those responsible, including agencies. The time has come for everyone to take responsibility for the issues.

The outspoken social rights activist said the society is at this point because of its socialization over a period of time. People, she said, need to be honest and acknowledge that their silence might have contributed to a culture of rape, a culture of non-respect for women.

“We also need to find a way of reversing that trend because clearly it’s a very negative thing that’s not going to do any good for our society,” Cherry explained.

Over the past few years, the debate about implimenting an online sex offender registry here has gained momentum, its fire fanned whenever a rape occurs. Cherry said she’s pleased that more people support such a move since by ‘naming and shaming’ offenders, victims would not be the only ones who suffer.

“Too often we tend to shield people which (redounds to) them committing more rapes and doing worse,” Cherry explained in her defence of the proposed measure. “So if we name and shame those committing heinous crimes against women, it might help. I’m not saying that this is the only solution as I’ve always said that we need a holistic approach.”

Stamping out rape and violence against women, Cherry added, will also entail people being more vigilant, understanding and respectful about the basic human rights of all citizens – men, women and children. Equally, she said, society needs to be very strict in dealing with those who go beyond the scope of what is right and lawful.

Pathologist Dr. Stephen King was one of the marchers, agreeing that it’s important to nurture boys to love and respect women. He said the message needs to be inculcated at home, school and the wider community. Too many mixed messages, he said, are being communicated.

“We often send these violent macho messages; however, we must be more cognizant and conscious about what we’re doing,” Dr. King told The VOICE. “Our boys must be nurtured in love so that they can manifest that love. That’s what real men do. I think strong men show love and are not violent.”

Dr. King agreed with Cherry that such marches can serve to raise awareness and put pressure on the collective society to put the right mechanisms in place, such as prevention, identification and cure for the problem. However, while he believes that sex offenders should be taken into care and removed from harming people, he opposes any move to ‘name and shame’ sex offenders.

“We have to be careful with the whole issue of a sex offender registry,” Dr. King said. “Is it to name and shame or is it to provide care for people who need it? Is it to protect people who need protection, namely victims? What exactly do we want to do?”