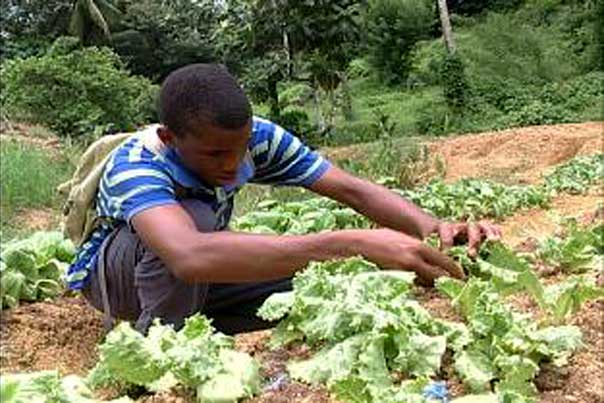 THE Ministry of Agriculture is reviewing the original agriculture sector development plan to help put together a new strategy for the sector.

Said Agriculture Minister Moses Jn Baptiste recently: “There were seven strategic objectives. The first policy objective was to increase the efficiency and competitiveness of agriculture; the second was to promote the adoption of improved appropriate technological packages; the third objective was to expand and diversify agricultural forestry and fisheries production, value added agro processing, and a general market base.”

Objective number four was to enhance the national food security status. Number five, to generate new opportunities for income and employment in rural areas. Number six, to conserve the national resource base; and number seven, to modernize the legislative policy framework for optimal agricultural framework and trade.

According to Jn Baptiste, the aim of the review is to determine the challenges of the previous policy; and to develop a more suitable strategy for the way forward.

So far there has been an internal consultation to review the national agricultural policy, held among the staff of the Ministry of Agriculture, Fisheries, Rural Development and Co-operatives. A stakeholder consultation in the various regions of our country was held during the month of October after which the development of the draft policy continued in October and November. The Ministry is hopeful that by the end of December, a complete draft of the plan will be ready for national consultation.”

St Lucia’s agricultural sector has declined appreciably over the years, mainly with the demise of the once lucrative banana industry which on its own once held the national economy together. In his 2015 budget statement earlier this year, Prime Minister Kenny Anthony reported that the performance of the agriculture sector was mixed. While banana exports to the UK declined, improvements were recorded in output of other crops, and in the production of livestock and eggs.

At the height of the reign of bananas as “green gold” St Lucia produced 160,000 tons of fruit in 1990 (48% of the Windward Islands’ banana production that year) . Last year banana exports to the UK reached just 8,896 metric tonnes. But the government says agriculture will continue to be an important contributor to the economy. Last year, hotel purchases of fruits and vegetable grew by 5.0 percent to 1,229.2 tonnes due to greater buoyancy in the tourism sector.

Improvements were also recorded in the livestock sub sector, evidenced by increases in chicken and pork production by 13.9 percent and 16.6 percent respectively. Saint Lucia continued to be self-sufficient in the production of eggs, with output increasing by 14.6 percent to 1.3 million dozens in 2014. The fisheries sub sector also improved with the volume of landed fish increasing by 3.4 percent to 1,695 tonnes.

The Ministry of Agriculture has began implementation of the Youth Agri-Entrepreneurial Programme (YAEP) with funding from the CARICOM Development Fund (CDF) in the amount of approximately $3.7 million. The second phase of the programme will be funded under the European Union-funded Banana Accompanying Measures. Under the Agricultural Transformation Programme, Euro €1.8 million or $6.24 million has been allocated towards this activity.

Approximately 124 acres have been made available for the programme and contracts have been awarded for land preparation activities at sites in Roseau, Mabouya Valley, River Dorée and Beauséjour. In addition, five greenhouses are currently being installed at River Dorée and a site is being prepared at Beauséjour for the installation of six greenhouses.

Under the training activities, a greenhouse seminar was held at the NSDC building in Vieux Fort in October 2014. A total of 24 individuals were trained in greenhouse operations and open field production of vegetables.

Government-owned lands in River Dorée, AnseGer, Beauséjour, Roseau, Balembouche and Mabouya Valley were utilised. An additional 164 young persons have registered and are waiting to be shortlisted for this project. In this year’s Budget, an allocation of $458,000 was made for the continuation of the programme activities.

Invest Saint Lucia (ISL) recently collaborated with the Ministry of Agriculture under the Youth Agricultural Entrepreneurial Programme, vesting 80 acres of its lands to the ministry for use in the project.

“We are indeed happy to contribute to this holistic enterprise focused on youth development, as this, in our view, encourages the island’s agricultural diversification efforts, the creation of a new generation of young agri-entreprenuers, and sustainable agriculture while simultaneously increasing local food production exports and employment generation.”

Recently, the ministry attempted to establish 14 hectares of cocoa through a European Union Global Climate Change Alliance program. The programme was done in partnership with the Caribbean Community Climate Change Centre (CCCCC). Said Jn. Baptiste: “The government sources funding from different supporting agencies and makes it available to the farming community as a means of saying we [need] this crop. This crop has potential, and those who come after us will have farms and livelihoods [to sustain them].”

But the programme is not without challenges. Jn. Baptiste said: “We started an expansion programme in 2008, to expand by 100 acres and rehabilitate about 300 acres. It so happened that we ran into Hurricane Tomas and it halted that process. By then, we had established some 80 plus acres, and all this planting material was actually given to the farmers free of charge.”

Despite the hindrances, the island’s cocoa industry continues to progress.

The banana sector too has been receiving attention with research and prevention efforts continuing in the fight against the Black Sigatoka disease. A project targeted towards the management of Black Sigatoka is being funded jointly by the Republic of China/Taiwan and the Government of Saint Lucia.

Permanent Secretary in the Ministry of Agriculture, Dr. Darius Gabriel said: “We plan to continue with that project. It will involve continuing the procurement and supply of agrochemicals for use in the treatment of the disease, selling the agro-chemicals to the certified farmers at the 50 percent subsidized price, continued training, demonstration plots and so on.”

The department is also researching plantain crops that are Black Sigatoka resistant.

The construction of the meat processing facility in Beausejour, Vieux-Fort is complete, with the equipment awaiting installation and testing.

“We have developed a food production plan which targets the production of certain commodities and we have selected about 10 commodities which we will target for increased production,” he said.

Earlier in the year , Senator BerthiaParle, a hotelier,r challenged local farmers to increase production, saying hotels were importing produce, because of a lack of diversification and quantities needed to supply the sector’s demands. She urged farmers to grow and supply enough fruit to meet 85 percent of the local demands .