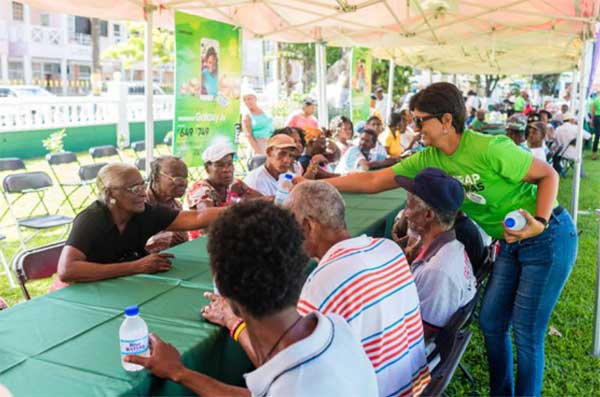 LIME and Feed the Poor Ministries have again combined to give senior citizens a Christmas treat, much to their appreciation.

“I don’t have enough words to express how grateful I am, and the love I feel in my heart for Mr. Gaspard and LIME for remembering us and taking care of us every Christmas.”

Those were words of appreciation expressed by a senior citizen from Castries, echoing the sentiments of several of the more than 150 people treated to a Christmas luncheon thanks to the generosity of Feed the Poor Ministry and LIME.

The majority of them came from the surrounding communities of Central Castries to attend the event organised for the city’s underprivileged citizens at the Derek Walcott Square. A team of LIME employees were there to welcome them along with the founder and CEO of Feed the Poor Ministry, Gaspard Henry.

The event which was originally held at the Castries Town Hall has had to be moved to the Derek Walcott Square to accommodate the increasing numbers who are being catered for every year.

Many of the patrons have been through tough times, however, the light of hope and gratitude shone in every face as they gathered to enjoy the care and attention being showered on them in the true spirit of Christmas.

Chatting away and laughing, they were in high spirits as they tucked into their lunch. Entertainment was provided by various local artistes and musicians, while members of the LIME team cheerfully moved around, taking care of their guests.

In an effort to make the event a more rewarding experience, LIME also provided them with T-shrits and care packages. According to some of the patrons, this is one of the events they always look forward to every year, especially during the Christmas season.

“We feel extremely proud to be partnering with Feed the Poor Ministry for this wonderful event,” said LIME Country Manager, Geraldine Pitt. “For us it’s our best initiative, simply because it’s the one that gives us the opportunity to give back to those people who have served this country so well over the years. As you walk around having conversations with them, the stories of what used to be are endless – the stories of their service to people, whether as teachers or police officers, whatever path in life they would have chosen. We know that they have given their best and this gives us the opportunity to just give back,” she added.

CEO of Feed the Poor Ministry, Gaspard Henry said, “LIME and Feed the Poor Ministry has fostered a wonderful partnership and I really want to thank LIME for supporting us for the past years. As I have always said, it is one thing to support an organisation financially but to really be there on the ground, it is a very different thing altogether. I want to thank God for giving me the strength to tarry and toil for all those years.”

In addition to supporting Feed the Poor Ministry annually at Christmas time, LIME sponsors the organization’s feeding programme every month, throughout the year.

LIME plans to work with Feed the Poor Ministry to expand the initiative across the island and will be partnering with Gaspard and his organization for its annual Christmas party scheduled for Wednesday at the CastriesTown Hall.