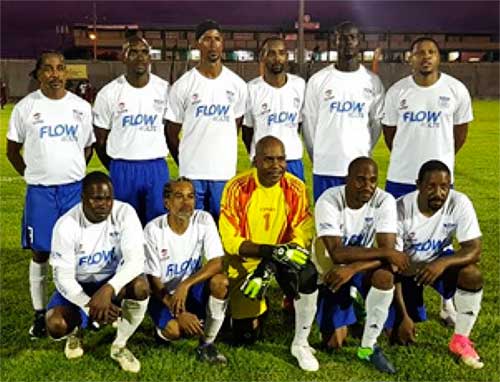 FLOW Lancers FC, All Blacks- Dennery, Marchand Veterans and Central Vieux Fort are through to the semifinal round of the 2019 – 2020 Veterans in Sports Inc. (VISI) Football Tournament after the quarterfinal of the Caribbean Alliance Gold Cup was played this past weekend at the Phillip Marcellin Grounds (PMG) in Vieux Fort.

For FLFC No. 23 Gabriel John opened the scoring in the 6th minute of play; No.11 Nigel Springer extended the lead in the 30th minute to make it 2 – 0; two minutes later Soufriere prolific goal scorer and captain Jerome Serville pulled one back to make it 2 – 1 and despite both teams’ attempts to take total control there were no further goals scored as FLFC went into the break with a slim advantage.

On the resumption, FLFC No. 10 Johnathan John put his team further ahead in the 63rd minute while No.11 Nigel Springer scored his second goal in the encounter in the 75th minute taking his tally of goals in the tournament to three. Soufriere No.18 Dave Augustin on the stroke of regulation time scored his team’s second goal to make it 4 – 2.

In the second match of the evening, All Blacks – Dennery (ABD) edged out Laborie Veterans 1 – 0, No. 8 HendrickCollymore being the goal scorer in the 31st minute. Despite Laborie Veterans’ attempts to equalize in the remaining minute of the first half ABD enjoyed a slim advantage going into the break.

On the resumption both teams upped the tempo a notch, and with a few scoring opportunities that went a begging at either end of the pitch the score line remained 1 – 0 in favour of ABD at the end of the final whistle.

The action continued on Sunday 26th at the same venue; just one day after Marchand Veterans laid to rest one of their fallen soldiers, football coach Cassius Glasgow affectionately known as “Cassey Boom”. Marchand Veterans and supporters breathed a sigh of relief when they defeated Anse la Raye 4 – 2 in a penalty shootout after the game ended 0 – 0 after regulation time as both teams were unable to find the back of the nets.

The men from the west coast would also be disappointed with their efforts as they dominated 55 percent of the game but failed to beat the Marchand defense.

In the final game of the evening, home team Central Vieux Fort (CVF) defeated Gros Islet Veterans 3 – 1. The men from the north of the island were swept off their feet by CVF who had them on the back foot 2 – 0 inside the first 10 minutes of play with goals from No. 22 David Charles in the 7th minute and No. 11 Titus Elva in the 9th minute.

In the second half, Gros Islet No. 14 Ian Charles pulled one back for his team in the 72nd minute; while CVF No. 10 Andy Jn Baptiste sealed the deal in the 78th minute as there were no further goals scored up until the final whistle.

Meanwhile, VISI crew and the four semifinalists of the Plate Championship will head back to the PMG this coming weekend for more football action. Labowi Connexions take on Vieux Fort North and Congorians play Valley Ledgens.