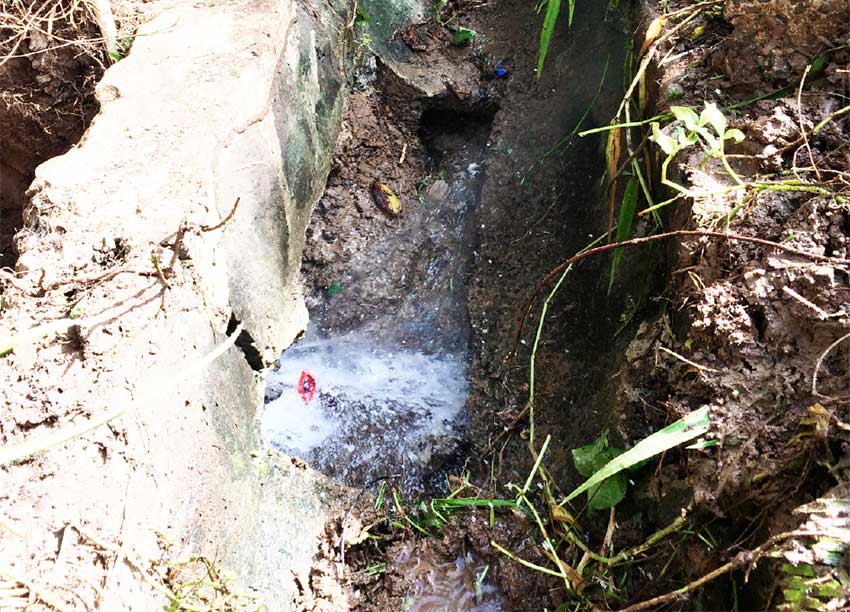 Residents from Independence City, Entrepot, Castries, are calling on the Water and Sewerage Company (WASCO) to respond quickly and more effectively to reports of busted lines. A busted pipeline within a drain on a hill in the area was reported to WASCO on the morning of June 4th, to which technicians subsequently attended to. WASCO technicians were observed by residents as they made three consecutive trips to the site of the busted pipe, where repairs were perceived to be executed.

Shortly after the technicians left and water was restored, the pipe ruptured again, which resulted in a significant amount of water being wasted all throughout the night into the following day. The water seemed to have burrowed a tunnel beneath the concrete in the drain and exited some feet down the bottom of the hill.

WASCO announced last May that concerns are rising in connection to the constantly decreasing water levels in their catchment areas. Cherry Ann Gaillard-Williams, Communication and Marketing Officer at WASCO, remarked “We are facing some serious challenges in terms of the available water that we can supply to our customers.” She said that steps were being taken to minimise the impact of water shortage. Communities have already been placed on a water rationing system to curb the issue. Independence City and surrounding areas have also been placed on this water rationing system. WASCO has urged persons to conserve water as much as possible, and residents of Independence City are asking the relevant division of WASCO to do the same.

One resident from the area on the morning of June 5th remarked, “WASCO should be more responsive to making repairs that would save water, -especially now that they’re talking about water shortages. That is perfectly good water that is just going to waste right now.” Technicians returned that morning and were finally able to repair the ruptured pipe.