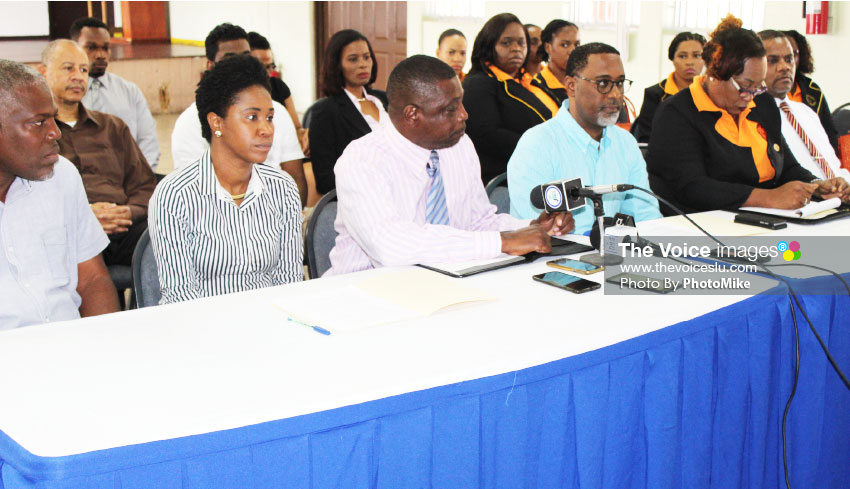 Showdown Looms As Workers Remain In Suspense Over Their Future…

The requests came as Chastanet prepared to present today to the nation a $1.4 billion budget for the 2018/2019 financial year, to which healthcare workers and professionals within the healthcare service will pay special attention following reports that the government plans to privatize the OKEU Hospital, the country’s premier healthcare facility.

Talk of a privatized future for the hospital has been ongoing for some time now, with government fueling the talks with comments about the healthcare service of other countries, particularly what obtains in the Cayman Islands.

But while privatization of the hospital has up to now been merely talk that has generated much agitation amongst healthcare workers and professionals — especially nurses — the Civil Service Association (CSA), the St. Lucia Medical and Dental Association and the Nurses Association have apparently decided it’s about time government faces them to discuss the matter.

The trade unions, all part of the Trade Union Federation (TUF), demanded that government sits with them to explain not just the type of management it wants for the hospital, but the country’s healthcare in general.

They say that healthcare matters of critical importance to the citizenry were not being discussed with them and accuse government of withholding vital information.

According to TUF President Julian Monrose, its affiliates are under tremendous pressure from their membership to explain certain things which they are hearing are about to take place within the health system, but are unable to confirm due to a lack of information from government.

“The government is not sharing the information and there is a lot of speculation and that is creating a level of panic among the professionals and workers.

“We attempted to meet with the prime minister last week. We wrote to him a letter that was carbon copied to the Minister of Health seeking some dialogue, but to date that letter has not been responded to.

“We owe it to our members and the public to engage in discussion and put ourselves in a position where we are demanding to be involved in the discussions as major stakeholders,” Monrose said.

President Alphonsus St. Rose of the St. Lucia Medical and Dental Association (SLMDA) was even more demanding that government provide what should really be public information.

He said: “As an Association and a trade union of professional healthcare providers, we have been, in spite of many attempts, unsuccessful in obtaining key information from the government on this very important healthcare issue of national concern.

“The lack of consultation, transparency and accountability regarding such a major decision is to all stakeholders troubling and unacceptable.”

He added: “Our history as frontline advocates for improving the delivery of quality, accessible and affordable healthcare on behalf of our members, co-workers and the public whom we serve, demands meaningful dialogue.”

“The SLMDA is therefore demanding our rightful seat at the table for dialogue and participation in the privatization process of a public asset of which we are important operational stakeholders,” St. Rose said.

Yvonne Edwin, President of the Civil Service Association (CSA) says she is concerned about the mixed messages sent out by the government relating to the type of management system for the hospital.

“The CSA has not been consulted about the implications concerning our members employed at Victoria Hospital and other areas within the health sector.

“We in the CSA are concerned about the preservation of the pensionable status of any employee who may have been appointed before February 2003 and who may be transferred to the OKEU Hospital and the implications for any public officer appointed by the Public Service Commission.

“Such issues should have been dealt with seriously because the decisions that will be taken will have life changing implications for these workers,” Edwin said.

“We call on the Ministry of Health to immediately make a study to determine the number of persons who would be impacted and provide that information.

“We demand that the government consult the CSA on the plan to facilitate the transition of workers to OKEU and this must be done without delay.

“Members are concerned and we need to provide the necessary information to members of the public and to our workers,” she added.

Edwin said that in the past government had adopted a pattern of ignoring requests for information, this having happened with other entities such as the National Printery, the Tourist Board, the Marketing Board, the St. Lucia Fish Marketing Corporation and the Post Office.

“These requests for information have been made but not answered and we are hoping that this is not a continuous pattern.

“The level of disrespect and disregard for the plight of workers employed in those agencies will not be tolerated and we again request this information from the government.

“We urged the government to put people before profits and preserve the welfare of workers before considering privatization.

“We need to dialogue; we need to inform our members and the public about what is happening with the OKEU Hospital,” she said.

Alicia Baptiste, President of the Nurses Association, believes the association has an obligation to the 400 members her association represents to provide them with information pertaining to their future within the healthcare system, information it does not have at this time.

“In the absence of information there is room for speculation, which makes our members very anxious and rightfully so.

“As important stakeholders in healthcare we need to be part of the process and we call on the powers that be to realize that the nurses are the backbone of healthcare and our members therefore need to know what is going on with regards to the OKEU Hospital,” she said.