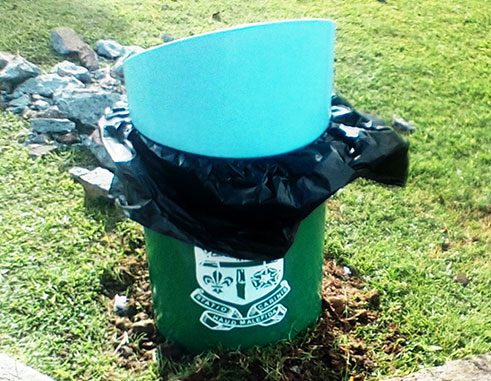 IT’S been confirmed that the installation of new waste disposal bins at Serenity Park Castries, is a part of the ‘Clean City Campaign’ spoken about by Mayor Peterson Francis.

Men were seen hard at work early Friday morning, taking turns to swing a sledgehammer at the concrete slabs that had been used to keep the old waste disposal bins grounded.

Those bins were removed, replaced with larger ones and subsequently disposed of, after the concrete slabs attached to them were broken down with the sledgehammer.

Last month at a press conference, the Mayor spoke about the “creation of new waste disposal bins” which he said “will be stationed around the city of Castries.”

Emblazoned upon the new waste disposal bins were the Latin words: Statio Haud Malefida Carinis, just below the flowers of St. Lucia’s Coat of Arms. The words which roughly translate into: ‘Hardly a faithless guard for ships’ were the words in the motto used for the “St Lucia 1875 – 1937 Blue Ensign badge (David Prothero, 15 March 1997 & 30 September 2002, Nick Artimovich, 18 March 1997) during the colonial period of the country’s history.

During last month’s presser, Francis was adamant that he wants “to use this campaign as the starting point for Castries to become one of the cleanest and healthiest cities in the region.”