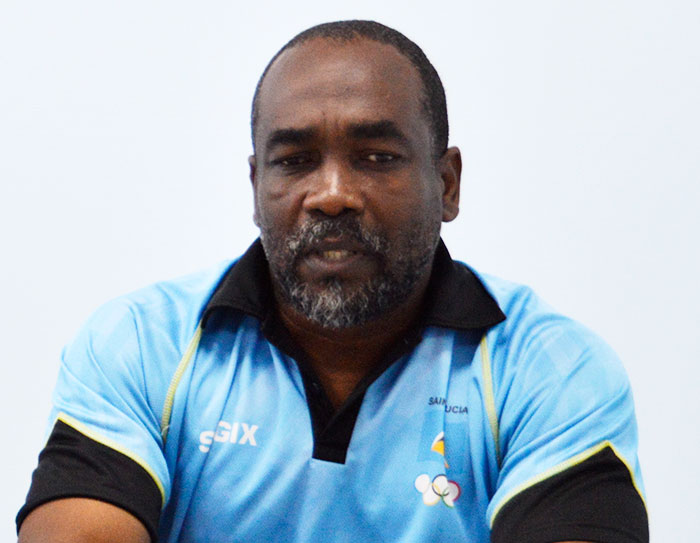 THE Saint Lucia Olympic Committee Inc. kicked off it 2018 calendar of activities with a press conference at its La Clery headquarters to discuss a number of matters pertaining to sports development among its 20 affiliates during the past year, while looking forward to further sports development this year.

SLOC General Secretary, Alfred Emmanuel, in his preamble, told the media that SLOC president, Fortuna Belrose, has outlined what they have undertaken during the last 12 months, and a preview of what they are expected to undertake in the upcoming months. He said the last 12 months were a very challenging for the SLOC.

“While we are prepared to assist our 20 members, we recognized the fact that a number of those members need the capacity to maximize the benefits that are out there for them. We also recognized the fact that there are some associations who repeatedly provide the SLOC with limited information without questioning what they have submitted,” Emmanuel said.

“Going forward, we will provide two project officers to work with those associations and once we have made that available, the time will come when we will have to demand certain information from them. Failing which, we will have to review the assistance to them and their members.”

Within the next ten weeks, Saint Lucia will be heading to the Commonwealth Games in Australia. To date, a number of athletes have been in training for the Games. The sporting disciplines of swimming (2), boxing (4) and track and field (10) are considered frontrunners and sometime in February the SLOC will be making a pronouncement as to who will be making that trip to the Gold Coast.

Said Emmanuel: “I want to reiterate that the SLOC has not selected any athlete as yet as it relates to participation in the Gold Coast Games. We have discussion with the Athletics Association which has indicated to us that following the completion of the Independence Championship slated for February 24 and 25, they will be making their recommendations for our consideration. Boxing would also have to make their recommendations for our consideration, likewise swimming.

“The Boxing Association has taken the initiative and we as a Commonwealth Games Association are prepared to support the initiative whereby three boxers will be attending an eight-week live-in camp in Trinidad and Tobago in preparation for the Commonwealth Games. Everybody has been assisted by the SLOC and we are now waiting for their final recommendations for our consideration.”

Saint Lucia competed at the Commonwealth Games in Glasgow, Scotland in 2014. For the games which were held from July 23 to August 3, a 36-member team was selected from six sporting disciplines.

The composition included 8 track and field athletes. Levern Spencer finished third with a height of 1.92 metres, while JeannelleScheper had to settle for a fourth place tie alongside LeontiaKallenoy of Cyprus with a clearing height of 1.89 meters having any performance of note.

The veteran administrator said, “The time has come whereby it is the responsibility of the SLOC to select individuals who we believe can make finals or make a podium finish. When you look at the financial resources that we have put out there, we are telling our members enough is enough. A finals or podium finish at the end of the day (is expected). We have to justify to our international funding agencies the monies that they have given us that we have made available to our members.

“It’s time for belt-tightening as it relates to our organizations and to tighten their belts…We hope they will see the need to cooperate to work fully with those officers, so that at the end of the day all will be singing from the hymn sheet.”

Emmanuel also fielded questions from the media about possible selections and, according to him, though some individuals may have reached the qualifying standards for the Commonwealth Games, the timeframe of this qualification must be considered. He went on to clarify that individuals who may have done so in the past must ensure that the standards would have been met recently.