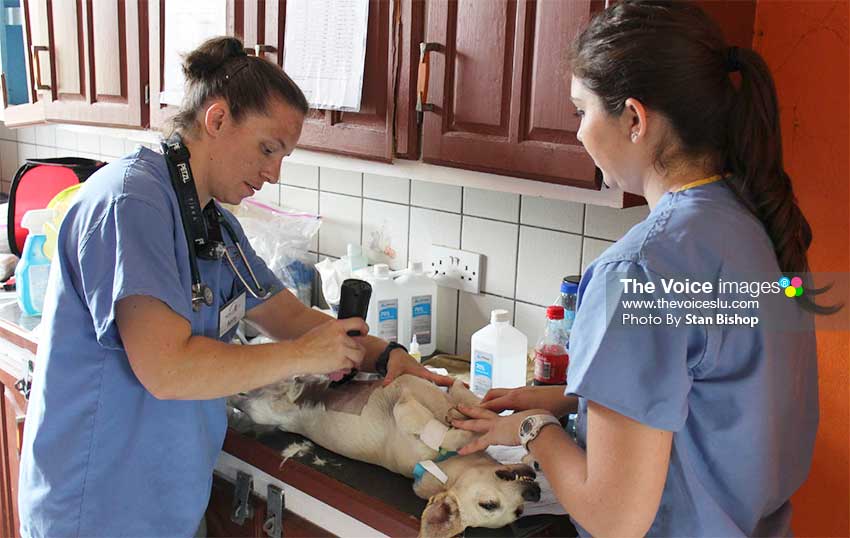 FOR many years now, stray dogs and cats have been part of the national pastime in Saint Lucia. With some homes being a stone’s throw from business-places and other thoroughfares, the line often becomes blurred as to whether these animals really are strays. These animals – mostly dogs — often run in packs, and are prone to abuse by passersby, death by misadventure, or disease. They also multiply in number, creating a public health problem.

So serious is the problem that Castries Mayor, Peterson Francis, put the eradication of stray dogs in the city among his top priorities when he took up the job last year. But while the Castries Constituency Council (CCC) boasts some success in that regard, the problem remains as scores of animals are seen traversing the city, many finding comfort under parked vehicles and eating leftover food indiscriminately discarded by the wayside.

Three years ago, Saint Lucia-born musician, Taj Weekes, took up the cause of arresting the problem of stray animals when he and his family were dining at a food establishment in Gros Islet. One of his sons, he said, kept asking him for $20 at intervals. After shelling out around $80, Weekes enquired of his son what he was doing with the money. That’s when Weekes found out that the youngster was actually buying food from the nearby food vendors to feed the stray dogs.

Since then, Weekes’s organization — They Often Cry Outreach (TOCO) — has been teaming up with other stakeholders to conduct spaying and neutering clinics in Saint Lucia. One such clinic was held last week when TOCO teamed up with Help Animal Welfare in Saint Lucia (HelpAWS) and World Vets to conduct four days of spaying and neutering dogs and cats. One session was held at the old, abandoned Gros Islet Police Station last Saturday and Sunday; the other at the Still Plantation in Soufriere on Tuesday and Wednesday this week. The clinics ran from 8:00 a.m. to 3:00 p.m.

When The VOICE caught up with the team at Gros Islet around noon last Saturday, they had already registered over 100 dogs and cats and treated nearly half that amount. The aim over the four-day period was to treat at least 400 animals. The clinics provided free spaying and neutering for stray animals as well as for animals whose owners cannot afford to pay for the procedure.

Founder of HelpAWS, Charlene Penney, said the idea for HelpAWS came about in 2013 when she moved to Saint Lucia. Two years later, the organization started rescuing animals and hosting spaying and neutering clinics with TOCO. To date, they have run four clinics and spayed and neutered over 2,000 dogs and cats. They have also rescued dogs and cats – mainly in Soufriere – where HelpAWS is based. She believes the procedure is crucial to controlling what many see as an out-of-control problem.

Laura Timmusk, another member of HelpAWS, said that during the hiatus between the free clinics, HelpAWS uses local vets to spay and neuter the animals. She said the aim is to reduce the high volume of strays on the streets, thereby keeping their numbers low, translating to fewer animals roaming the streets. The organization also finds foster homes for the animals it rescues.

Ashley Leo is part of the team of volunteers from World Vets which travelled to Saint Lucia to assist in the clinics. She described the experience as “amazing”.

“It feels good just being here and seeing the transition of an old building to a hospital that’s functional,” Leo said. “I think that just the evolution of that process is amazing.”

Leo explained the spaying and neutering process: “When the animals come in, we put a catheter in them and make them a little sleepy with the pre-medication. We put them under anesthesia by I.V. and then perform the surgery by taking out the uterus in the females and the testicles in the males so they can’t reproduce.”

On the relevance of spaying and neutering, she said: “Worldwide, it’s very crucial because taking care of pets is very costly, especially when they reproduce and those costs go up exponentially. Sometimes, a lot of them end up not being cared for, resulting in them becoming strays and even contracting diseases, which they in turn spread to humans.

“As for the medicinal side of it, we see a lot of tumours and sexually transmitted diseases (STDs) in these animals when they’re not spayed and neutered — which are sometimes life-threatening.”

Leo said the team was surprised at the high number of cats brought in last Saturday, especially females. About one-third of the pets registered were cats and two-thirds dogs. Nevertheless, she said it was still a high number for felines.

Patrick Altius, dog owner, was among the scores of people who brought in their pets last Saturday to undergo the procedure. Last year, a stray dog followed Altius’s son home after he was returning from a walk. Altius let the dog into the yard and that was it – she refused to leave and instantly became part of his family. Afterwards, that dog – named Pony — gave birth to nine puppies.

Although pleased about the new litter, he said he brought her to get spayed and neutered on Saturday because apart from Pony and her pups, he also has five other dogs. The fact that he is always away at work, coupled with the money he would save by having the procedure done for free, he thought it best to bring Pony – “a darling of a dog” — to the clinic.

“I think it’s a very good exercise, so kudos to whoever is organizing it,” he told The VOICE. “While you love your animals, you will understand that it can be a burden on you when you have too many that you cannot take care of. Dogs are part and parcel of our society. They’re not here by mistake – neither are we. So we have to love them and take care of them.”

“We hope that this will reduce the number of animals who suffer on the street unnecessarily,” he said.