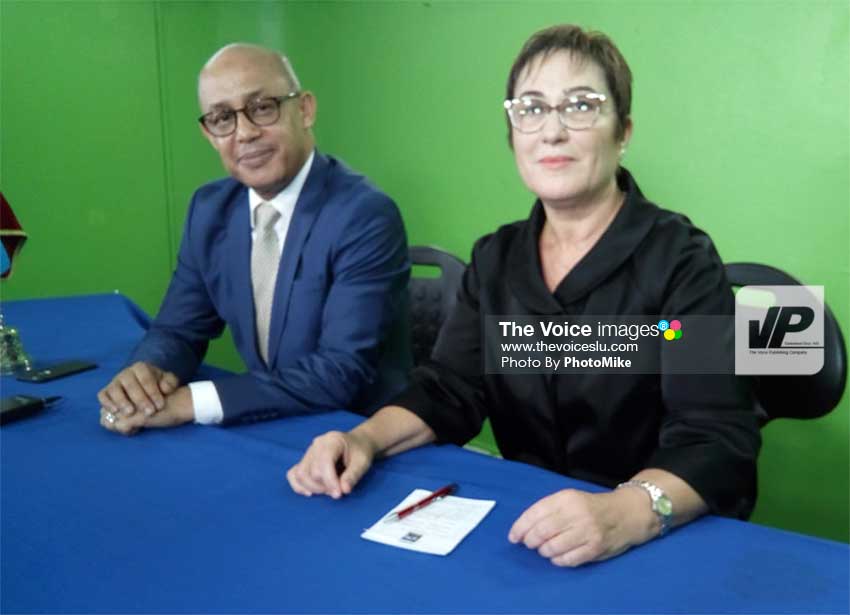 THE Kingdom of Morocco this week opened another page of cooperation with St. Lucia with the arrival of one of its nationals to the country, Dr. Raja Aghzadi a breast cancer specialist, one highly regarded in the world for that speciality.

The surgeon was introduced to the media last Thursday by Moroccan Ambassador to the Organization of Eastern Caribbean States (OECS), H.E. Abderrahim Kadmiri.

Ambassador Kadmiri described Dr.Aghzadi as one of the leading people in medicine in Morocco, who is also well-known and respected in her country.

Dr.Aghzadi will be working with patients during her stay in St. Lucia. She participated as an honoured guest in the regional conference on the family and development organized by the Caribbean Center for Family and Human Rights (CARIFAM).

Her history in the medical field is astonishing and she has made easier the pain of women suffering with cancer.

Professor Raja Aghzadi obtained her Baccalaureate at age 15 and became a doctor at 21, the youngest in her time.

She began her career at age 30. A generalist surgeon and an oncologist by training, she said what led her to cancerology was her awareness of the existing lack in breast surgery and the fact that she is a woman.

“Many women came to the clinic to ask for help. They came to me and so I decided to go to them, too. And then, finally, a woman is able to feel the pain of another woman,” she said.

Constantly present between the walls of the University Hospital Center in Rabat, Professor Aghzadi said that because of the pain she feels for women, particularly those who cannot reach her, that in 2001 she created the association, “Heart of Women”.

“Women are struggling to come to the hospital, especially those residing in secluded areas. So I told myself that I would rather go to these women to care for them,” she said.

Aghzadi, through her association, travels through Morocco to carry out awareness-raising and care campaigns. She examines women, and when some of them show signs of warning, takes them to the nearest hospital. Nearly 47,000 women were examined in Morocco by her care, according to a release circulated by the Moroccan Embassy here.

However, the action of the association is not only felt in the Moroccan Kingdom. Indeed, “Heart of Women” is active since 2003 in several African countries, including Ghana, Gambia, Mali, Senegal, Niger, and Ivory Coast, where Aghzadi was appointed Honorary Consul

St. Lucia is one of the countries closest in cooperation with the Kingdom of Morocco. According to Ambassador Kadmiri, within the last decade, Morocco has been investing in more than one field of cooperation with St. Lucia which includes, but is not limited to, education, agriculture and tourism.