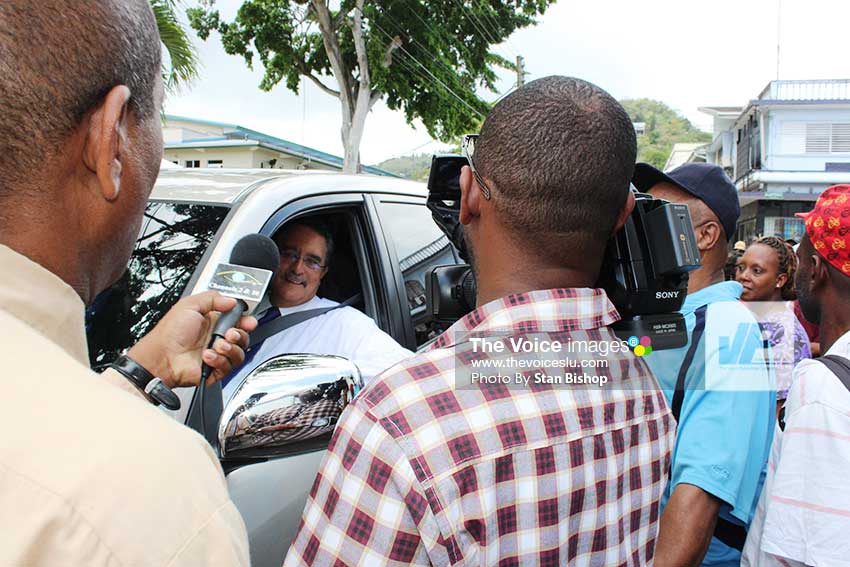 The opening of the Second Session of the Eleventh Parliament of Saint Lucia was not without controversy last Tuesday as government’s decision to axe its subvention to the Saint Lucia National Trust (SLNT) continues to attract reaction from the public.

A small crowd of SLNT employees and members stood on the pavement on Laborie Street outside Parliament in what seemed to be a silent protest against government’s decision to discontinue the annual $700,000 allocation it made to the Trust, citing fiscal challenges.

However, Director of SLNT, BishnuTulsie, was at odds with the government’s decision as he spoke to the media on Tuesday.

He added: “The only way I can understand the Prime Minister’s comment is if I internalized his view that heritage is the same as your credit rating, which was a statement he made. But I can’t identify with that comment.”

With an annual budget of about $2.5 million, of which $700,000 came from the government previously and the balance raised by the Trust through rentals and from external funding, Tulsie said the defunding was both empowering and disappointing.

“The Trust will continue in some way, shape or form,” he said. “The Prime Minister’s decision to remove the subvention we looked at as a threat – a threat coming from the highest level of government – an unfortunate reaction to the trust fulfilling its mandate.”

Daniel Lulu Bergasse, who said she became a Trust member in February after finding out about the proposed dolphinarium for Pigeon Island, said the trust does “a very good job” despite its limited resources. She believes government has it all wrong, adding that she felt betrayed and disappointed.

“To me, the (defunding) comes across as a huge disconnect. The government is supposed to be there for the people, not for itself. This smacks of a dictator. We employ the government, not the other way around; the government is our employees and they are given a job which should benefit everyone, not just a few,” Bergasse told The VOICE.

As a result of the defunding, Bergasse said members were now encouraging the Trust to reintroduce itself to let people know more about the Trust, its mandate and what it does, partly to attract new members.

Meanwhile, Desmond Joseph, disagrees with the Trust’s position, telling The VOICE that government needed to prioritize its resources.

Prime Minister Allen Chastanet reiterated on Tuesday that he had no fight with the National Trust, adding that he had met with its Chairperson and some of the councillors on two occasions, during which they were apprised of imminent changes.

“All I’m trying to do is to encourage all our entities that it’s a changed time and that we have to be very mindful of every single cent that we spend,” Chastanet said. “We have to make sure that we’re trying to reach the people who have not been so blessed and so fortunate.”

Chastanet said government remained committed to funding any initiative the Trust brought forward that makes good business sense. He said that unlike the Trust, the Archaeological Society truly depends exclusively on the support of the State, accounting for the latter’s $210,000 subvention not being cut.

Said Chastanet: “I hope that they can see that and focus on the real issue. The real issue is not about being a martyr; the real issue is about how we’re going to develop our sites, how the Trust can become a stronger advocate in order to be an independent voice in the development of our country.”

Leader of the Opposition, Philip J. Pierre, however, believes that the government made a grave error by defunding a key conservation organization which has its genesis in an Act of Parliament 42 years ago.

“The whole issue of the environment is a very sensitive issue and it’s going to have serious repercussions on Saint Lucia – both as an investment destination and a country of governance. It’s a serious act of victimization and vindictiveness,” Pierre said.

The Trust will this Saturday host an emergency membership meeting from 1:00 p.m. at its Pigeon Island headquarters to discuss the way forward. While it continues to appeal to the government to rescind its latest decision to axe its subvention, it also said that it will seek the support of international partners, civil society and Saint Lucians in general to advocate on its behalf.

The Trust will also host a press conference at the same venue today.