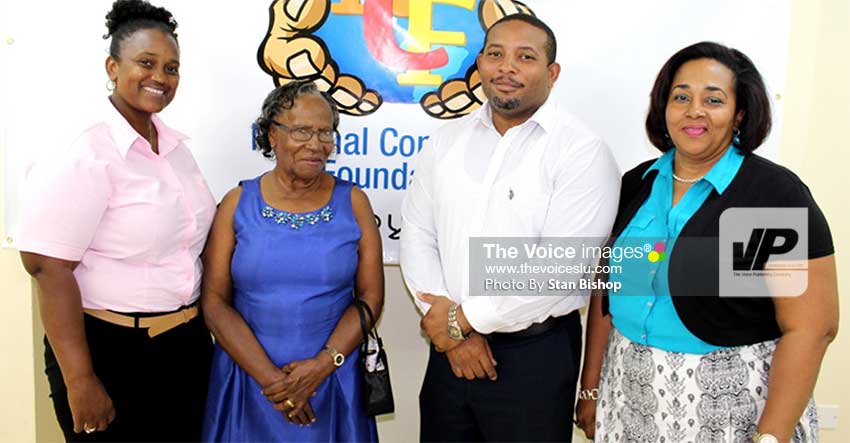 THE National Community Foundation (NCF) is already making plans to host its 14th Annual Nationwide Telethon slated for Sunday, May 28 at the new financial centre at Pointe Seraphine.

This year’s telethon will retain the same in-studio format adopted two years ago in an effort to minimize costs associated with hosting the event, the flagship fundraiser of the organization.

The NCF was established in 2002 as a non-profit philanthropic arm of the National Insurance Corporation (NIC), which is one of NCF’s major donors. Through its various social programmes, the lives of many people have been impacted in a positive way.

“The NCF has been able to assist individuals and families and has funded various projects because of the generosity of corporate donors and individuals in society which is displayed during the National Telethon,” said board member, Diane Felicien, at last Thursday’s media launch of the event.

NCF Chairman, Leslie Serieux, took up the new post in January, said NCF’s coffers are limited and is calling on kindhearted citizens to contribute generously to this year’s telethon.

“Give any little you can and it will be appreciated,” Serieux urged. “But we need to go a little further this year.”

Serieux said the NCF telethon had not been meeting its financial target set over the years. despite the target being kept at $200,000 for some years now, he believes that given the importance of the fund, people needed to be more generous.

“We’ll definitely like to change that this year and in the years going forward so that we can make a more meaningful contribution to Saint Lucian life as we know it,” Serieux said.

NCF Executive Director, Michelle Phillips, who replaced Madonna Monrose who resigned earlier this year after nearly four years in the post, said that while the NCF receives an annual subvention from the National Insurance Corporation (NIC), the general operating expenses are the responsibility of the NCF. She, too, is hoping that the target is exceeded this year.

“We’re keeping our target at $200,000 this year because we understand that we are operating in a slow economy and people are watching their spending,” Phillips said. “But we still have to continue with the work because there are some people who do not have the reach that we do and we need to put out our hands to help them.”

Phillips said education grants account for a huge part of NCF’s funds. Currently, nearly 150 students are on scholarships at various schools. On average, each scholarship – which includes school uniforms, books, facility fees, transportation and meal allowance – ranges between $1,500 and $2,000. However, the variation depends on the distance each child has travel to and from school.

Another crucial area of assistance offered by the NCF is in the area of health. In fact, nearly 60% of the health budget goes towards assisting people with treatment for cancer. With such treatments often being expensive, Phillips said the NCF finds itself cash-strapped yet unwilling to turn people away.

Since 2015, the NCF has honoured benefactors who have contributed yeoman service to the community through their selflessness. Painter Sir Dunstan St. Omer was honoured posthumously in 2015 while musician Ronald “Boo” Hinkson received that honour last year.

This year, Hermina Amos of Laborie will receive the honour. For the past decade, she contributed to a donor-advised fund with the NCF whereby she made generous donations that funded scholarships for schoolchildren. However, Amos has decided to opt out of the programme citing financial constraints.