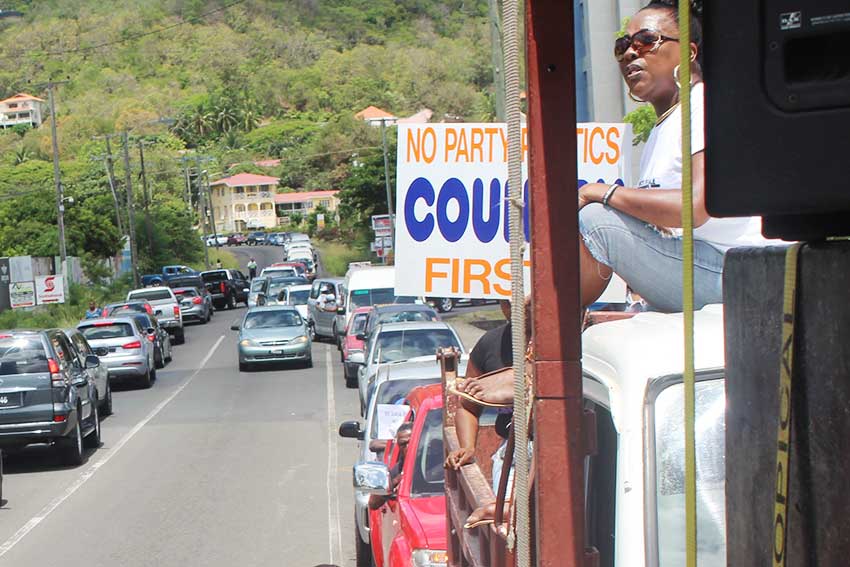 The new activist group, Concerned Citizens of Saint Lucia, made their introduction onto the scene in a loud and powerful way over the weekend, hoping to not only get their message across, but to also attract new members.

The movement was held in the form of a Whistle Stop rally and was a whole-day affair which began at 9:00 a.m. at the Massy Mega parking lot and culminated at Serenity Park at 6:00 p.m. following drives through areas including Reduit, Beauusejour, Monchy, Babonneau, Corinth, Entrepot and Marchand. The tagline for the whistle stop was “St. Lucia Is Not For Sale”.

Jerry George, one of the co-ordinators who also plays the role of Press Relations Officer for CCSL, said the main role of the movement is to carefully highlight that partisan politics has no place in the movement as the main concern is the betterment of St. Lucia and the people.

George told The VOICE the island was being run like a business and not a democracy.

He said: “We live in a democratic country and it is the people who placed the Prime Minister there. The people with loud voices are now saying ‘Listen to us for a bit. You do not know everything, you do not have the solutions to everything and we live in some of the communities that are going to be affected.’ Whatever goes on in DSH is not only going to affect the people of Vieux Fort. Yes, they will feel the brunt of it, but in totality, St. Lucians are going to be hurt by it. And so we have to consider that, and if the Prime Minister believes that only US$2.6 billion dollars matters, then it does not make sense. If you are going to have that kind of investment and the people do not have a say about it, benefit in it or have an opinion, then it does not make any sense.”

George said the organization, which was established little over one month ago, has been focusing on pressing issues, namely the Desert Star Holding project, Citizenship By Investment Programme and the proposed Dolphin Park.

Those issues, he said, are matters that stand to be detrimental for the island and the people if they are not revisited and amended.

“That goes back to the US$1 per acre for 999 acres over 99 years. You can see that we are losing ground on this. Not only is it not good in terms of what St. Lucians will be held with after or if it does not succeed, but if it does succeed, we’re still not benefitting because the investor could just take it all. And so we are saying that it needs to be revisited. The speakers kept saying today that the Prime Minister needs to be a little more understanding, as well as a little more focused on what the people are saying. The Vieux Fort people are definitely annoyed that he has not up to this time come out and speak to them himself.”

George said the current proposals are nothing but lose-lose situations for locals, as investors and the government alike are the only ones who stand to benefit.

He said: “They will come in, employ people at very low rates and move out after the honeymoon period of their investment is over. We cannot afford to have that happen again. We have come too far already for us to go back to that and also to have someone, by his actions and words say ‘I have no respect for you and I know this is going to be good for us and nobody else can have a say because I am the CEO of St. Lucia Company Inc.’ Well, this is far from the truth and he must put his conscience before credit ratings. St. Lucia being run like a company means that more people will be on the breadline than we currently have and this is not only unfair, but disastrous for St. Lucia.”

Asked whether he thought any real change would come as a result of the rally, George said: “If we have influenced one person along the way, just one, to be part of a group like this, I would feel very happy and rested going to my grave that at least one person took some sort of action as a result if this organization.”

Fifteen speakers addressed the crowds along the route about said issues as well as a number of others including young people and youth-related issues. Included in the list of speakers were Julius Joseph of the Concerned Citizens of Vieux Fort and Richard Frederick.

George said he was overwhelmed with the response and claimed that at one point, there were over 50 vehicles filled with supporters of the movement trailing along in the motorcade and more joined thereafter.

He said: “I can’t give an exact number of people, but judging from what I saw when I saw the number of cars, I think we were successful for our very first rally.”