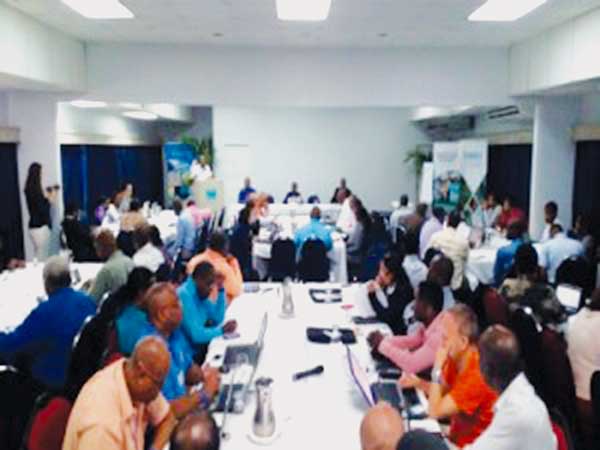 Meteorologist at the Grenada National Meteorological Services, Trisha Miller, told the meeting that though the region would experience conditions that are hotter than the average dry season, it would still be cooler than in the recent past.

“Recently, we all know it was very hot in the past few months, especially from August to October. The temperature was high in most places and this led to us feeling uncomfortable at times….the heat however would not be a concern for most places in the upcoming months.”

“Currently La Nina conditions are being experienced but we expect that this would gradually dissipate throughout the dry season. From December to February conditions should be wet enough to partly off-set the dryness and water shortages in some regions,” she added.

Cuba and the Cayman Islands are however forecasted to remain in drought conditions and will be closely monitored.

Miller later told the Caribbean Media Corporation (CMC) that the reason for the forecasted cooler conditions this dry season is because of the anticipated increase in rainfall.

“With regards to the rainfall, we are expecting that the chance of above normal rainfall is higher than the other two categories which is normal or below normal…even though we are going into our dry season,” Miller said.

Looking back at the 2015-2016 dry season, ShontelleStoute of the Caribbean Institute of Meteorology and Hydrology (CIMH), said there were concerns for drought across the eastern Caribbean especially the Guianas up to the Greater Antilles.

Stoute told CMC most of the region experienced drought conditions during 2015 with some rains in the latter part of the wet season. However she said “this rainfall would not have been enough for the deficit of rainfall that would have been received throughout the year.

So going into the 2015-16 dry season, there would have been still a shortfall with rainfall, but it would not have been as bad as the 2014-15 dry season.”

Grenada’s Minister for Tourism and Civil Aviation, with responsibility for meteorology Dr. Clarice Modeste-Curwen, told the opening ceremony that it is important that all sectors are aware of the climatology of the region and how they can be affected by it.

She said since the local and regional response to climate change is becoming more prominent, there is need for government and people to know how to leverage the responses to their advantage, adding that it was crucial to the sustainability of all economies.

“It is important for us to understand climate variability which is the year to year variation in our climate. Knowledge of this allows us to plan better for what we can expect, for instance identification of potential changes to planting seasons for various crops.”

The Tourism Minister said governments need to support CariCOF since knowledge of climate variability is also important when developing baselines “because we need to know what has happened before to determine what would happen.”

“It is extremely important for us as decision makers in government to be aware of these and give support to whatever measures are recommended, so that we can weather the dry season as best as possible.”

Principal of the CIMH Dr. David Farrell said the importance of the CariCOF cannot be over stated.