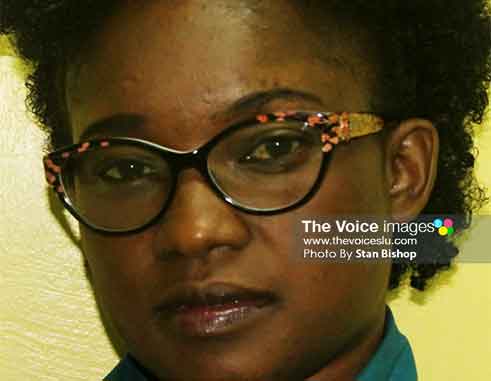 Cautions Public Against Being Duped.

LATOIYA St. Clair-Abbott says that someone is using her identity to gain financial capital on the tragic death of her husband, Allen, whose motorcycle collided with a minibus on August 25, 2014 along the Laborie/Vieux Fort Highway.

The Dennery resident told The VOICE this week that she was at her grandmother’s home last Sunday when a man came and greeted her and asked that he speaks to her mother.

After telling him that her mother had not been living in Saint Lucia for more than 30 years, the man grew insistent, telling her that he wanted to speak to her mother regarding some financial transactions the two were engaged in.

“He insisted that he speak to my mother, telling me that she was married to the police officer who died in the motorcycle accident two years ago. I asked him when the conversation between he and my mother had taken place and he told me it was just two days prior. At that point, I told him that it was indeed my husband who had died in the accident and that I did not recall having any previous conversation with him,” St. Clair-Abbott explained.

After initially passing off St. Clair-Abbott’s claim as a joke, the conversation grew, and he asked her a few more questions to validate that she was indeed who she claimed she was. She said he became more confused, shook his head and said, “What did I do to myself? What did I do?”

After asking her a few more questions, including some regarding her family ties, he soon became aware that he had been duped by another woman who had visited his tyre shop and pretended to be Latoiya St. Clair-Abbott.

“He said the woman gave him a story that sounded like mine, based purely on the rumours that were circulating around my husband’s death,” St. Clair-Abbott said. “He said she showed him a scar on her forehead and said her husband had done that to her before he died.”

“He told me that she continued her story, saying that things were hard at home and that her husband did not leave anything in his will for her and that he had women all over the place,” the mother of one, said.

St. Clair-Abbott said that even though she had conducted business at that tyre shop on at least one occasion, the woman’s ruse might have been easy to pull off since the owner might have just had a fleeting idea of what she (St. Clair-Abbott) actually looks like. According to her, the tyre shop owner described the woman he was approached by as having almost all of her physical features.

St. Clair-Abbott said the man explained that he went as far as lending the alleged scam artist $2000 for her to put down a deposit on a vehicle at a dealership until her insurance cheque cleared. The woman even gave him a cell phone number to call to validate her story about the vehicle. He called that number and the story checked out. However, St. Clair-Abbott said the man has not seen or heard from the woman since last Friday.

“I think she used the compassionate card to take advantage of that man, especially since she realized that he knew about the accident. Apparently, she gave him directions to my home, too,” she said.

St. Clair-Abbott said she encouraged the man to report the matter to the police but he was too embarrassed to do so initially. However, they both decided that it was best that they did, she said.

“He wants his money back from the woman who is pretending to be me,” she said. “I’m also very concerned about the whole affair that I’m actually coming out of my usual comfort zone to address the matter. I’d like to just be left alone to try and get my life back together because after the accident, I was a mess and had to be hospitalized due to the trauma.”

At the time of his death, 40-year-old Police Constable 280 Abbott was a member of the Special Services Unit (SSU) and had been in the Royal St. Lucia Police Force for 19 years.

She said that the alleged scam artist’s ruse might have worked easily because her husband’s fateful accident drew a lot of media attention, so many people knew about it. However, she said, many people do not know her because she has always stayed out of the spotlight and prefers being a private person. However, someone seems to be using that fact to make money from it.

“These kinds of scams are real. If someone had told me that this would be happening to me, I wouldn’t believe them. Moreover, if someone were to share this story with me, I would get bored at some point because I would think that the person is actually writing an essay,” St. Clair-Abbott explained.

St. Clair-Abbott is encouraging the public to contact the police if they have any information that could lead to the apprehension of the alleged scam artist using her identity to solicit funds on her behalf. She also cautions against people letting down their guard whenever they are approached by people they do not know personally asking for financial assistance.

“You really need to have a personal relationship with people so as to be able to identify them, especially when you decide to loan them money. If people can put so much effort into pulling something like this off, I don’t think they would do it just once,” she said.

She also wants the public to be mindful of anyone using her name to gain public sympathy and financial rewards.

“I have not gone out there soliciting funds from anyone. I’m not in any position to do it, either. I am moving on with my life and would like others to move on with theirs,” Clair-Abbott said.