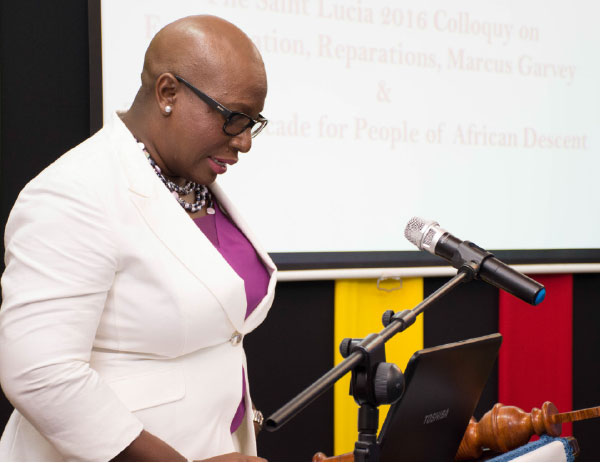 THE Reparations School Lectures continue at the St. Mary’s College today, with the National Reparations Committee (NRC) taking the ongoing series to the island’s premier secondary school for boys.

The SMC lecture, will be delivered by NRC Chairman Earl Bousquet, himself a Samarian.

Bousquet told The VOICE: “This will be my first school lecture in this series and I look forward to taking the message to today’s students in a better way than we ever had in my time over five decades ago.”

The NRC Chairman said the lectures series “is gaining both momentum and popularity” and that “six have already been held at secondary schools in Castries, Vieux Fort and Soufriere.”

“The lectures,” he added, “seek to introduce CARICOM’s quest for Reparations from Britain and the European for Slavery and Native Genocide, not only to the students but also to those teachers who need to understand where and what the issue is about today.”

Minister for Education, Innovation, Gender Relations and Sustainable Development Dr. Gale T.C. Rigobert, has welcomed what she called “a critical but underexposed part of Caribbean history.”

Endorsing the NRC’s school lectures initiative, Dr.Rigobert says: “Children need to be exposed to post-colonial teachings on slavery, and its impact on developing states in the Caribbean.

She told the GIS and NTN: “I am glad to know that the conversation is going to be percolated through the education system and that our children will become conversant on the story of slavery, what it meant, what it means for where we are now and the notion of compensation or reparations.”

She added that “the story of slavery should be told from an empowerment perspective, highlighting the resilience and revolutionary spirit of the Caribbean people’s African heritage, instead of portraying slavery, as is often done, from a victim’s view.”

“It is indeed one of the areas that very often we lament that not enough of our Caribbean people know that story—that there isn’t sufficient education [about it].

“But I’ve always argued that the story of slavery needs to be told from a perspective of empowerment.”

The CARICOM Youth Forum will take place Friday, at the Castries City Council (CCC) Auditorium, to coincide with official observance of the UN-designated International Creole Day.

The Baton Relay will start at Vigie and encircle the streets of Castries from midday on Saturday and will end at Derek Walcott Square at 4 p.m., when the two-hour Youth Rally will begin from 4 p.m. to 6 p.m.

The Friday Youth Forum will be addressed by local writer, poet and thinker Vladimir Lucien on ‘Why Reparations Matters’ and will involve youth and students from schools and communities island-wide.