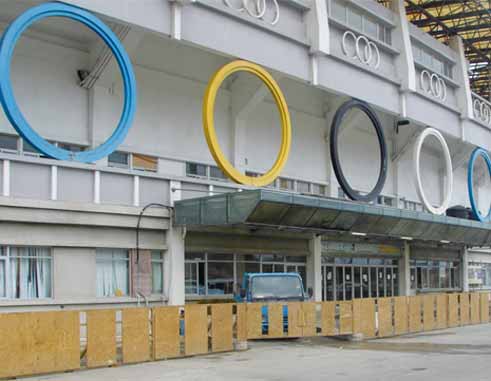 A WALK-THROUGH of St. Jude Hospital by officials of the National Workers Union (NWU) last week underscored the urgency for a new home or immediate fix for that important health institution.

The exercise has resulted in a letter to Health Minister, Mary Isaac, from the NWU calling for an urgent fix to the problems identified.

Housed at the George Odlum Stadium since September 2009 after a fire ravaged its old site in Cantonement, Vieux Fort, the stadium was supposed to have been a temporary home for the hospital, to give the government enough time to restore the burned-out building.

The temporary period, which at one time was placed at six months and later extended to a year, has since turned into seven years. Meanwhile, the government has been moving from one plan to the next as it relates to the construction of the hospital at Cantonement.

Under the current Allen Chastanet administration, work on the building has stopped as the government carries out an audit, costing almost $1 million, to determine how much more money is needed to complete it, whether the monies so far spent are accounted for, whether work contracts were valid, among other things.

Not much attention has been paid to the section of the stadium housing the facilities making up the hospital from 2009 to the present. Deterioration and the wear and tear of the physical parts of the stadium have been described as unsafe by the National Workers Union (NWU), which claims that people should not be working in that environment.

“The issues are many, such as the heat that is in the place, the roof, which looks like it would crash down on you at any time, the general cleanliness of the location and termites,” she said.

Many more issues unfolded during the walk-through and the union representative said they were not surprised. However, the letter from the union to the Health Minister called for her intervention in repairing, correcting or patching up some of the conditions of the place.

“We wrote the Minister for Health asking for her quick intervention in resolving some of the sordid conditions of the place. It is not fair to expect staff to work at their best in conditions like this. And what about the patients?” Myers said.

“We have also met with management of the hospital several times. They keep saying something will be done but nothing has been done. The staff members’ frustrations have reached their peak. They are not comfortable,” Myers said.

The NWU is now awaiting a response from Isaac to determine its next move as far as the hospital is concerned.

While the walk-through is the most recent action taken by the trade union, there are other outstanding matters on which the NWU patiently awaits closure, such as the dismissal of a worker under what the Union says were unreasonable grounds. The NWU is still trying to set a date with the Minister for Labour to deal with the matter. Minister Stephenson King, it must be noted, inherited that case, which was not dealt with by the former Labour Minister, Dr. Robert Lewis.

Other outstanding matters between the hospital and the NWU include a petition by staff calling for the dismissal of the Human Resource Manager which is still in abeyance, as well as the negotiations between the two entities on the employment conditions of workers.