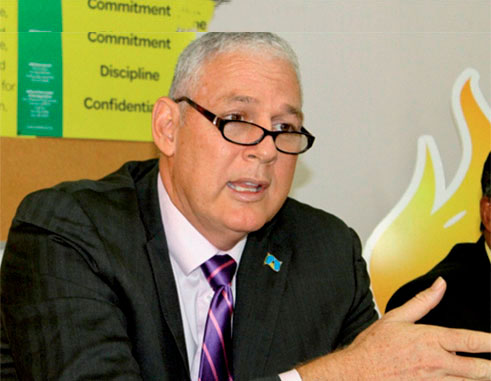 THE government is set to announce sweeping changes in the next few weeks aimed at stimulating economic growth in order to offset its growing financial woes.

Prime Minister Chastanet is due to make a special presentation to Saint Lucians by this month-end during which he will delve into the specifics of government’s proposed tax plans.

Chastanet appeared on DBS Television’s “NewsMaker Live” programme earlier this week, telling host Timothy Poleon that government’s task in turning the economy around for the better was a monumental but inevitable one. With very few sectors to invest in, he said Saint Lucians and the corporate sector need some relief.

“We have to build a tax system around those businesses to make sure that they are as competitive as possible,” Chastanet said. “At the same time, (they need to) pay a fair share of the money in order to help in sustaining the economy.”

The Prime Minister said reducing unemployment remains a top priority. With unemployment figures estimated at 23%, wooing investors’ confidence back to Saint Lucia is vital. He said unemployment levels can only decrease by tapping into multiple areas that offer the best results.

“We’ve seen that investment has dried up. The only new investment the former government was bringing to the table was through the CIP (and) not based on the economics or the brand of Saint Lucia. So I’ve been out busily trying to get new investment,” Chastanet indicated.

Despite these challenges, Chastanet said government has been identifying investors to support critical areas of investment, such as tourism, in an effort to increase the number of hotel rooms and diversify the island’s economic base. Other areas such as information technology centres and the financial and agricultural sectors, he said, are critical to encouraging national development.

Chastanet added: “What we want to do is to focus on the key sectors and areas that we have – which is what the quadrant plan does. We’re putting teams focused on those things with an idea of just driving each one, which is a brand and business by itself.”

The Prime Minister said government aims to double the Gross Domestic Product (GDP) over the next ten years. During the Budget Presentation next April, he said a detailed four-year plan will be tabled which should redound to achieving that ambitious objective. He believes Saint Lucia stands to benefit more if more creative approaches are made at attracting the right kind and quantum of investment.

“One billion dollars can’t cut it,” Chastanet said, referencing the annual budget government usually allocates for its operations. “We’re not creating enough economies of scale to be able to compete against other people in the world. So we believe that doubling the GDP is only the beginning.”