The Caribbean Public Health Agency (CARPHA) reports that positive Zika cases confirmed by laboratory testing represent only the “tip of the iceberg.”

This means that the number of confirmed Zika cases published in the media is only a small number of infected persons who were tested and confirmed as positive for having the disease.

Executive Director of CARPHA, Dr. C. James Hospedales, said “often times when the figures of confirmed laboratory cases of diseases such as Chikungunya and Zika are reported to the media, the public reacts with surprise and suspicion, even commenting that the government and CARPHA are trying to cover up the real figures.”

Dr. Hospedales stated that this is far from the truth as reported figures are only laboratory confirmed positive cases and do not represent everyone who has been infected. These figures are what are described as the “tip of the iceberg” (see diagram of the iceberg phenomenon enclosed). 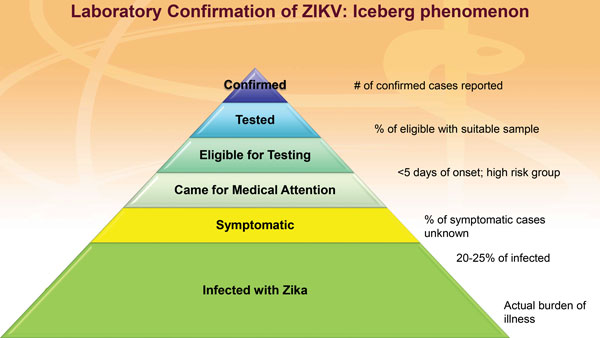 With regards to the Zika outbreak, the reported cases are persons who have been infected with Zika and then sought medical attention. They are the ones who were eligible for testing and then got tested. These persons would have been identified as being in a ‘high risk’ category, namely, pregnant women, children under the age of 5 years, adults over 65 years, hospitalized patients and persons with co-morbidities (with chronic illnesses).

The Iceberg Phenomenon states that only a small percentage of all infected persons end up being laboratory confirmed positive cases. The Iceberg Phenomenon is important and provides valuable information for public health decision making. It gives an indication of the magnitude of the infection so that action can be taken to reach those who cannot be seen and are ‘under the water’.