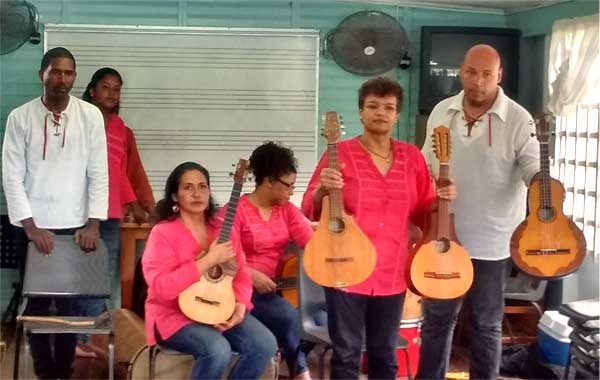 ON Saturday, July 2, the Venezuelan experimental folk group “Tambour y Gloria” (Drum and Glory) arrived in Saint Lucia to participate in cultural activities in celebration of the 205th Anniversary of the Independence of Venezuela.

The Venezuelan musicians conducted workshops at the Vide Bouteille Primary School from Monday, July 4 to Friday July 8. The participants (children, youth and adults) had the opportunity to participate in intense sessions in song, dance, the cuatro (a Venezuelan traditional instrument) and Afro-Venezuelan percussion.

These renowned cultural ambassadors, contributed to the further strengthening of the bonds of friendship and integration between Saint Lucia and Venezuela, through the teaching of Venezuelan music to 150 participants from various communities. They offered a repertoire of different genres of traditional Venezuelan music as Joropo from the east, central and plains Venezuela, Golpeslarenses, bagpipe tambora, quitiplás, drums of Aragua, Parrandas, calypso, among others.

The group “Tambor y Gloria” was born March 28, 1981 in the parish of San Juan in Caracas with the primary objective of spreading the appreciation of Venezuelan traditional music throughout the country. In the group’s 35-year existence they have had the opportunity to participate in various national and international cultural festivals. They have facilitated various workshops in communities across Venezuela – and continue to do – in the field of the traditional music arts. Most of the members are teachers at many cultural institutions, who facilitate online courses and are also involved in a variety of cultural projects.

On Friday July 8, the concert of the Tambour y Gloria, held in commemoration of the 205th Anniversary of the Independence of Venezuela, took place at the Convent of Benedictine Nuns at Coubaril, located in Castries, with Governor-General Dame PearletteLouisy in attendance, along with several ministers of government, ambassadors accredited to Saint Lucia, other specially invited guests and the general public.

Upon completion of each of the performances, the musicians provided a brief explanation of the instruments used in Venezuelan musical genres, such as: the cuatro, mandolin, the bandolas (eastern plains and central), maracas, Afro-Venezuelan drums (cumaco, the quitiplás, the pujao or carouse drum, bells and Bumbac (to play calypso).

The concert performance, which included workshop participants, was composed of several songs and dances in different languages – Spanish, English and Creole – demonstrating the similarities between our traditional cultural expressions and reaffirming, once again, that the whole Caribbean shares the same cultural heritage, and that as such, it is important to promote and consolidate the integration process among Venezuela, Saint Lucia and the rest of the Caribbean and Latin America.