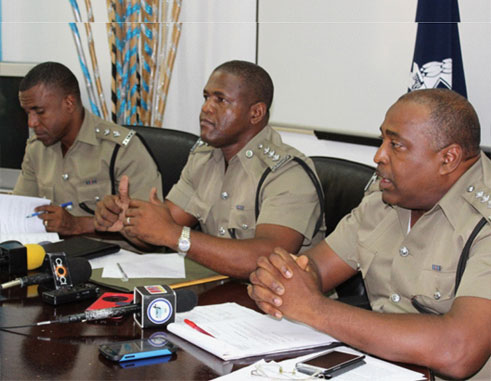 WITH hoteliers offering promotional deals up to 50 percent for carnival and the Royal St. Lucia Police saying that it will be on full alert for the activities, especially Monday and Tuesday’s parade of the bands in the city’s center, Carnival 2016 is all set to explode.

But the excitement that is expected to be raised several notches tonight with the Calypso Monarch competition will be monitored keenly by police.

“Obey the laws and cooperate with police officers,” was the warning given by Assistant Superintendent Gregory Alexander, head of the Police Press Office.

He and Assistant Superintendent Bernard Gaston and Inspector Dexter Felix met with reporters yesterday to highlight the traffic management plan for the two days of the parade of the bands.

“The laws of the state and traffic regulations will not be suspended,” Gaston warned.

The lawmen said that a traffic plan for the centre of the City of Castries will be administered thoroughly, however this will cause the relocation of some bus stands, the complete closure of some of the roads within the city centre, traffic diversions and interruptions to the normal flow of traffic.

“As you know we are just days away from the main carnival activity, which is the parade of the bands slated for Monday and Tuesday. We have finalized the traffic management plan for this particular activity and now it is just a question of effectively executing that plan,” said Gaston.

However, he warned that the success of the plan depends on the conduct of drivers and their cooperation with the police.

On Monday and Tuesday motorists travelling southbound to Castries from the north of the country are asked to use the Corinth/Grande Riviere/Balata/Morne du Don Roads for entry into Castries. The bypass road next to the zoo in Union will be a one way route heading to Castries.

Motorists travelling to the north of the island and wanting to use the Gros Islet Highway are asked to use only the left or outer lane as the inner lane is reserved for emergency vehicles and purposes.

The roundabout at Mega J will be closed one hour before the first band takes to the road. The Castries/Gros Islet Highway from the Grande Riviere intersection will be closed to all vehicular traffic so too will be the John Compton Highway.

According to the Tourist Board thousands of visitors are already on island to take in the sights and sounds of carnival. The island’s lead promotions and marketing agency said it had made a special pitch to woo Caribbean carnival lovers from notably Barbados, Antigua, Grenada, Trinidad and Tobago and the French Caribbean, as a means of drumming up interest in the sights, sounds and splendour of Lucian Carnival.

“A visit during carnival season is an experience unlike any other, where travellers have the opportunity to become immersed in the Saint Lucian culture, one song at a time,” says Tracey Warner-Arnold, Deputy Director of Tourism.