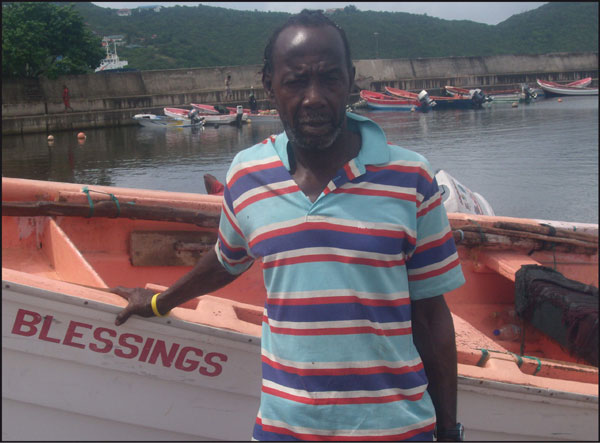 LAWRENCE Henry, one of the two fish and boat handlers, also called “Boat Boys” who were recognized by the Goodwill Fisheries Cooperative of Vieux-Fort for their contribution to the development of the cooperative, enjoys his job and promises to continue working at it, rather than break the law to earn a living.

Henry, 49, of Vieux-Fort was recognized last week at one of the cooperative’s events to commemorate Fishermen’s Feast which was held on Wednesday.

“I earn an honest living… although I make very little. I rather work as a boat boy, than to steal people’s things to earn a living,” Henry told THE VOICE in an interview.

The cooperative recognized approximately 30 persons for their contributions towards the development of the cooperative and the fishing industry as a whole. They included past and present board members, present staff and fishermen.

General Manager of the cooperative, Kaygianna Charlery said that the boat boys say they usually feel left out during such activities, so this year a decision was taken to recognize them.

The boat boys were presented with Certificates of Recognition and a small monetary present.

Some of the other events held by the cooperative to commemorate the occasion included a church service on the compound of the Vieux-Fort Fishing Port, boat races, and prizes for the biggest catch and single biggest fish of the day.

According to Henry, his job as a boat boy includes the cleaning of the fishermen’s boats and cloaks, carrying their boat engines and cleaning fish, among other things.

“Carrying those heavy engines on your back is not easy…sometimes your body just can’t take the pressure and you are forced to take a rest,” he said.

According to him, he started working as a “boat boy” at the age of 14 at the expense of his schooling.

“I did not complete my schooling… when my mother sent me to school I used to go by the beach in Vieux-Fort and spend the day with the fishermen,” he recalled.

He said his mother was not aware of this until much later.

Henry recalled how his friends used to make fun of him for doing menial work for fishermen to earn a living. But now, according to him, some of those who were ridiculing him are now doing the same thing to earn their living.

“Right now they are just like me. They are all boat boys …”, he said.

According to Henry, the fishermen are not always able to pay him immediately after he has worked for them, but when they make money he gets his share.