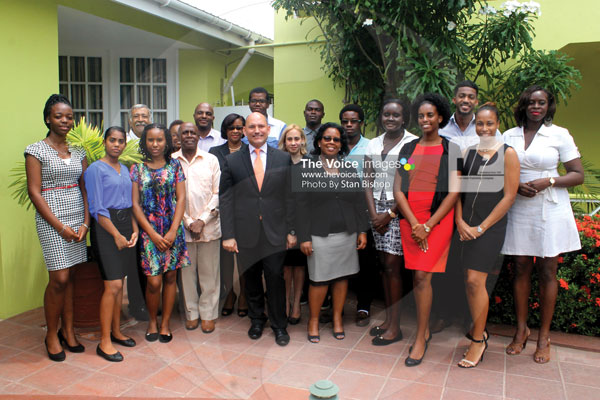 TWELVE Saint Lucians received their scholarship files last Thursday that will allow them to enroll in the respective Cuban Higher Education Centres to begin studies this summer.

The presentation was held at Bay Gardens where the students were given the necessary documents and crucial words of advice prior to embarking on their educational journey to pursue studies in medicine, health care technology, nursing, architecture and postgraduate internal medicine.

Cuban Ambassador to Saint Lucia, Jorge Soberon, said the students will spend the first year learning Spanish, which should help them better understand the language in which their courses will be taught.

Ambassador Soberon described the granting of scholarships as “a major effort” by his country, adding that the Cuban scholarship programme has realized great results over the past five decades despite difficult moments. Saint Lucians, he said, have been a major part of that success.

The ambassador also urged the students to be on good behaviour while in Cuba as they should expect the strict application of established regulations by the study centres. He also encouraged them to form fraternal relations between the peoples of both countries.

President of the Humanistic Solidarity Association (Saint Lucia-Cuba), Rawle Harvey, said the Cuban government has been very generous over the years by granting scholarships to Saint Lucians to study in that Spanish-speaking country. That generosity extended further when the Cuban government recently decided to increase the number of scholarships from four to twelve.

Harvey also cautioned the students against becoming ungrateful and complacent about the opportunities they are being offered, adding that the chance to study in Cuba is not one to squander.

“Many students in the past have hurt themselves and Saint Lucia with this bad attitude,” Harvey said. “Some of them boast about getting more money than the teachers and professors, which is very negative behaviour. We need you to show your appreciation to the people of Cuba for the opportunities they are giving you.”

He also explained that some students might find the Cuban cuisine challenging to adjust to, especially since rice is a staple in Cuba. Also, sharing rooms and bathrooms might be the norm, he told the students.

Harvey said that while the Humanistic Solidarity Association goes to great lengths to invite parents and students returning from their studies in Cuba to attend its various activities here, the turnout is often poor. He believes supporting the association’s many activities should be a symbol of gratitude.

Permanent Secretary in the Ministry of Education, Esther Brathwaite, said the Cuban government needs to be commended for providing students with opportunities to pursue Bachelor’s Degrees, a generosity that should not be taken for granted.

She said many scholarship programmes Saint Lucians benefit from often require students paying for accommodations and other means. However, students studying in Cuba are only required to pay their return airfare.

Brathwaite implored the students studying medicine to ensure they finish their programmes in Cuba. Some students in the past, she said, opted to return to Saint Lucia to complete their final year elsewhere.

She said the medical university some – also located in the Caribbean – those students chose to complete their studies was not accredited by the Caribbean Accreditation Authority for Education in Medicine and other Health Professions (CAAM-HP), which serves the 15-member CARICOM region.

“The Ministry of Health does not grant accreditation,” Brathwaite said. “But we understand and recognize that Saint Lucia is participatory in this agreement with CAAM-HP whereby medical universities must be accredited. The Saint Lucia Medical & Dental Council recognizes only the accredited programmes.”