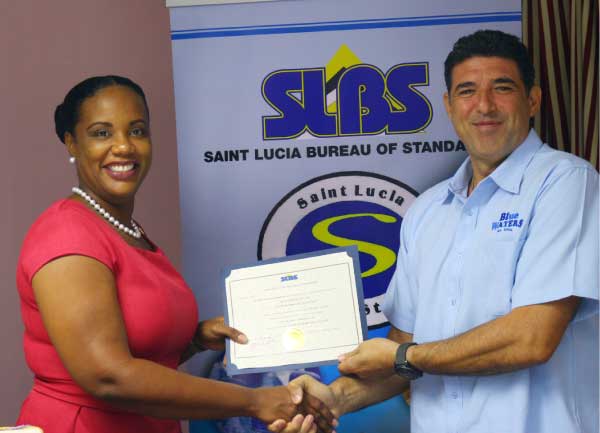 THE Saint Lucia Bureau of Standards (SLBS) has awarded the Standards Mark to Blue Waters, one of the largest manufacturers and distributors of bottled water on the island.

Blue Waters on Thursday signed its first licensing agreement with the SLBS since the opening of its manufacturing plant here.

It was a proud moment for Blue Waters, whose top management led by Managing Director Ramon Esper, Plant Manager Denis Appleton and a cross section of staff whose commitment to the process resulted in this milestone just a few months after entry into the programme.

Blue Waters is justifiably proud. Appleton says while it was difficult at times to adhere to some of the requirements for certification to the mark, the end goal was clear to demonstrate their commitment to bringing an excellent product to the consumer. According to Appleton, this is another step in mapping the future growth and expansion of Blue Waters to other OECS markets which was a major priority.

The Saint Lucia Standards Mark has developed a reputation among consumers as a seal which gives confidence in the quality of the product. To date, bottled water has established its dominance of the seal and Blue Waters says it is a contract with the consumer that every bottle of purified water from Blue Waters has gone through a third party evaluation of its quality.

Director of the Saint Lucia Bureau of Standards Dr. Mkabi Walcott expressed her pleasure at the signing indicating that the Saint Lucia Standard Mark is a well respected seal with the integrity of a well administered regime of inspection and testing to support and guarantee high quality products.

The SLBS has, for years, promoted the Saint Lucia Standards Mark as the premier seal of approval in a contract between the manufacturer and the consumer. At the core of this contract is the manufacturer’s commitment to put its customers at the centre of its product development strategy.

Dr. Walcott said: “It is more than making a product for the public; it is ensuring that it far exceeds the customer expectations for quality and safety.”