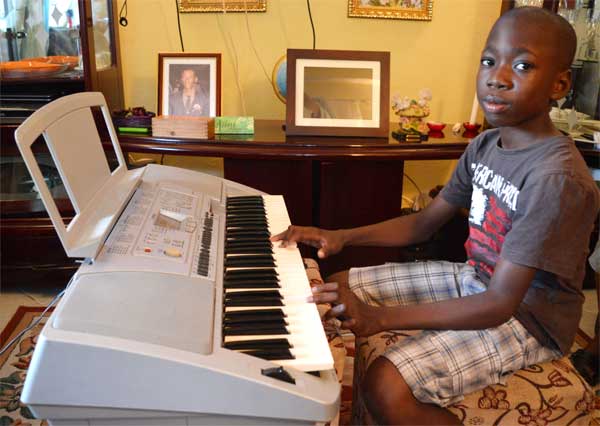 HE is 11 years old and attends the Monchy Primary School. A Grade 6 student.his favourite subject is mathematics and he is proud of his class teacher Sherry Ann Jn Baptiste. But Jadon Pappin (in picture) has another passion: music.

Pappin, this past Sunday, caught my attention at a family gathering when he played a number of Christmas and gospel tunes on the keyboard, a performance which moved the many persons who were present. Interestingly, though, his favourite piece of musical equipment is the quatro.

Asked why the quatro his reply was: “I love folk music and my favourite artiste was Frank Norville”.

Pappin’s dream is to continue playing the keyboard and quarto. He also intends to write his own songs.

Pappin is an all round sportsman as well, with special emphasis on tennis and football. In fact he recently represented his school at the Inter Primary/Secondary Schools tennis championship that was held at the National Tennis Centre. On centre court he held his own amongst some of the island’s leading junior players by winning four and losing two out of the six matches he played.

She continued: “From an early age when he entered pre-school I had an eye on him. There were those caregivers who would come into the house to work with him and they always said to me that he had a special talent. He went to kindergarten, now he is at primary school and it’s the same thing. He has carried it along to every single class he jumps to.

“I will give him all the support that I can one of which is to send him to the School of Music”.