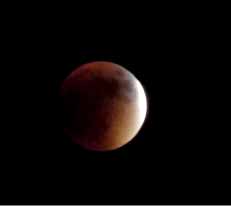 THE world was treated to a rare sight Sunday night as two magnificent occurrences, a super moon and a lunar eclipse, merged to form what has been branded a “Super Blood Moon”.

All eyes were staring at the sky as St. Lucia as well as countries from North America, South America, West Africa and Western Europe got to witness the rare event.

To those who were unsure of what was so special about Sunday night’s event, here’s the science behind it:

• A super moon occurs when a full moon is at the closest point to the earth in its elliptical orbit around the planet. This makes the full moon appear up to 14 percent larger and brighter than usual.

• On the other hand, a lunar eclipse occurs when the moon passes into earth’s shadow from the sun as it orbits around the planet. This happens because the Earth’s atmosphere scatters blue light more strongly than red light, and it is this red light that reaches the lunar surface often turning the moon a blood red colour.

According to NASA, the phenomenon began at 8:11 p.m. ET. The moon then passed through the dark part of the earth’s shadow from 9:07 p.m. ET and the total eclipse took place at 10:11 p.m. ET which was considered as that magic moment when the moon turned that rusty red colour.