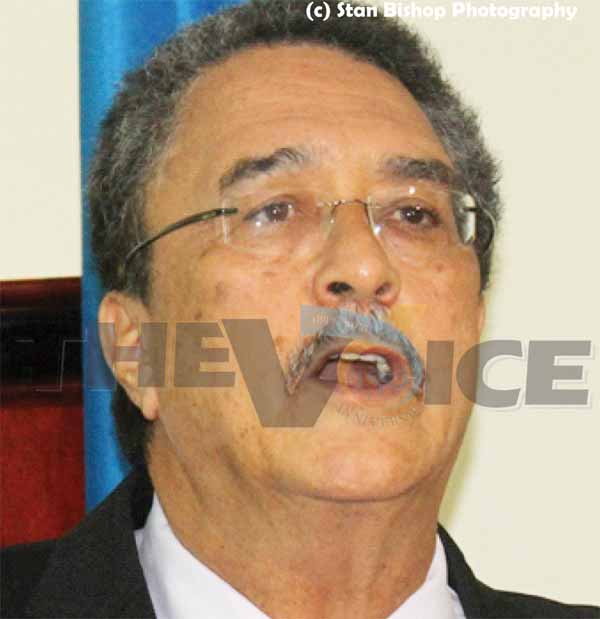 PRIME Minister Dr. Kenny Anthony believes that based on preliminary economic figures from January through June this year, Saint Lucia’s economic performance is on a rebound for the better.

Reading from a prepared script at a press briefing held in the Cabinet Room Thursday, Dr. Anthony told reporters that recent performances in the tourism, construction and manufacturing sectors have given government some level of optimism about the island’s economic future.

The government has come under increasing fire from opposition parties, the United Workers Party (UWP) and Lucian People’s Movement (LPM) for not doing enough to implement policies to steer Saint Lucia away from its current economic malaise. The people are being shortchanged, both opposition parties say.

However, Dr. Anthony said tourism has been posting record performance over the first half of this year, with stay-over arrivals increasing by 5.3% to 185,424. The increase, he said, represents the most stay-over arrivals recorded for the January-June period over the past five years.

Despite the increased performances in tourism, the Prime Minister added that the 2015/16 winter season will be an even colder one for Saint Lucia as preliminary data suggest that the island will receive fewer cruise ship arrivals during that period.

According to Dr. Anthony, the construction sector is currently realizing a turnaround, with the value of imported construction materials increasing by 4.8% between January and June compared with the same period last year. Expenditure on major construction projects, he said, also increased during the period under review.

The Prime Minister cited the Soufriere Square, Vieux Fort Administrative Complex, Gros Islet Human Resource Development Centre, the Aquatic Centre and the Choc-Gros Islet Highway among the projects government will embark on to create employment. He also named a number of private sector projects being undertaken, namely Tides Sugar Beach in Soufriere, Harbour Club Hotel, the new Unicomer building at Marisule, Dayana commercial centre in Castries, and the estimated US$100 million reconstruction of Smugglers Hotel, as key projects that will generate employment.

The manufacturing sector, which has faced many challenges over the years, is said to have increased its production output by 1.8% between January and June this year. However, food and food products – the largest and most significant category – recorded a 5.9% decline in the value of production. Nevertheless, output of corrugated paper and paper board increased by 13.4%, wood and wood products by 29% and furnishings by 20.5%.

Dr. Anthony said inflation was on the decline, following an increase of 3.5% last year. He added that growth in the consumer price index between January and June this year averaged 0.3%, attributing it to the dampening impact of lower fuel cost on consumer prices.

According to Dr. Anthony, Saint Lucia’s debt stock stood at $2.79116 billion as at June this year, a 0.1% increase relative to December last year, adding that the low rate of increase was caused by the paying off of a $63.5 million loan during the period under review.

The largest contributor to growth in current expenditure during this fiscal year, Dr. Anthony said, is interest payment on debt due to past debt accumulation and the maturity profile of the debt stock. He said that as a greater amount of debt matures, the debt service cost is expected to increase. Nevertheless, he projected a growth in the country’s gross domestic product albeit conditionally.

“On the basis of the performance of the economy during the first half of 2015 and expectations for the rest of the year, real GDP growth is estimated to expand somewhere within the range of 0.8 to 2.4 percent in 2015,” the Prime Minister said. “However, this projection is subject to considerable downside risks given the precarious nature of the incipient recovery coupled with the headwinds emanating from the slow pace of global economic recovery. The economic slowdown in China and Brazil is particularly worrisome.”

Dr. Anthony, who also holds the portfolio of Minister for Finance, said his government’s fiscal performance recorded some improvement, citing an overall surplus between April and June his year as a result of the start of government’s capital programme being implemented.

In his weekly videotaped address last week, Chastanet criticized the government’s handling of the economy, saying that Saint Lucians were being made to pay for the failings of the current administration. The Prime Minister’s response, it seems, was spurred by Chastanet’s remarks.

Since making his pronouncements last Thursday, the Prime Minister has come under further fire from the opposition United Workers Party (UWP) which contends that his figures and optimism do very little to appease the challenging socio-economic situation of Saint Lucians.

During its own press conference held later that day, UWP Political Leader, Allen Chastanet, said the Prime Minister’s policies were ineffective. Saint Lucia’s debt was one of the contentious issues raised by Chastanet.

Noticeably absent from the Prime Minister’s report were the current unemployment figures. Chastanet accused the government of being selective with the economic figures by choosing to leave out that crucial element of the equation.

“Saint Lucia has one of the highest employment rates in the OECS and also in the Caribbean,” Chastanet said. “The youth unemployment is approaching 50% — one out of every two young people in this country is unemployed. Do you believe that we should be satisfied with the fact that he’s telling us he doesn’t know what the numbers are?”

In ending his speech last Thursday, Dr. Anthony called on Saint Lucians to be understanding and patient as Saint Lucia emerges from the current economic state. It’s a tough ask, considering the fact that high cost of living and unemployment continue to be major concerns among the citizenry.