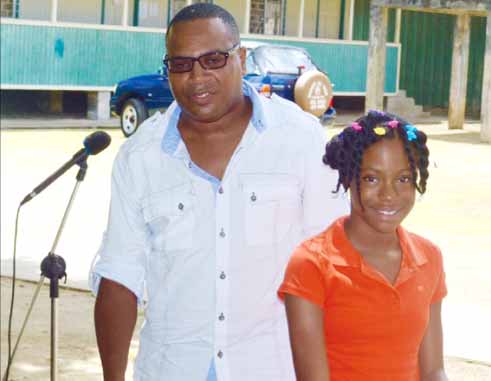 AS part of Boka Group’s ongoing commitment to assist a whole generation of students at Canaries and Bouton Combined schools with educational growth and achievement, Boka Group has rewarded each of the respective school’s top performing students at the Common Entrance Examination at a ceremony last Friday.

GiannaServais from Bouton Combined School, who achieved 80.5 percent in the Common Entrance Exam was awarded a prize of a bicycle and bursary towards her books and other school fees for the coming school term. She will be attending the Leon Hess Secondary School..

Canaries Combined’s top performer at the Common Entrance Examination was Jeanelle Smith who achieved a pass rate of 85.67 percent and will be attending St. Joseph’s Convent.. Jeanelle was awarded a one year scholarship from the Boka Group that will cover her books and other school fees.

Education Officer for the district Mrs. Valencia Charlery stated that without the assistance of sponsors like the Boka Group, such incentives as a means of encouraging the students to do better would not be possible, or available. she applauded Boka Group’s involvement in the three schools in Canaries and Bouton saying: “The help that Boka Group is giving to these schools has resulted in an immediate remarkable improvement in the children’s performance, with these schools achieving an overall average of 63.85 percent and Canaries Primary School moving up the rankings to second in Education District 8.“

This particular district was renowned for very low Common Entrance passing grades for over five years. However, the students have been able to raise the bar and achieve a 63. 85 percent pass rate, resulting in more of them earning places in secondary schools.

Mr. George Alcindor Managing Director of Boka Group stated that students will continue to work with the principal and students in Bouton and Canaries, to improve overall performance at Common Entrance by implementing innovative programmes that will engage students not only academically but by stimulating their minds and creativity.

He said: “One such programme that the Group hopes to employ is Chess in Schools, which has become a very popular learning tool in the north of the island. The long term goal is to have many more students from this district place in the top 10 at the island’s Common Entrance Exam.”