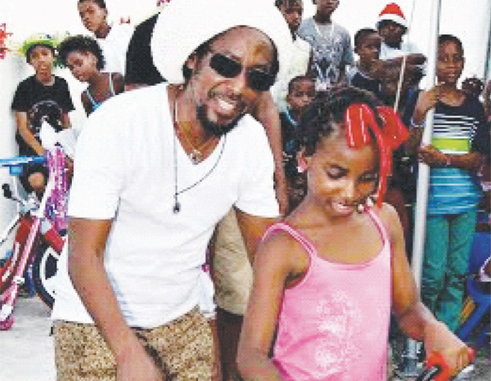 RENOWNED Saint Lucian reggae musician, Taj Weekes, came bearing gifts for the children of Canaries during the Christmas season. But as much as he gives, he says, the need multiplies.

Weekes, founder of They Often Cry Outreach (TOCO) and UNICEF champion for children, told The VOICE this week that over 300 children between the ages of 3 and 11 years old were invited to the Christmas party on Saturday, December 18.

“It’s an ongoing initiative that we do every year,” Weekes said. “But this year we teamed up with the Boka Group. We fed 320 children in the Canaries area. In fact, we invited 297 children but others came. Nevertheless, we made sure that each child got fed and received a gift.”

Weekes, who is based overseas and performs around the world with his band, Adowa, is a passionate advocate in the fight against diabetes, said the meals served on the day were all healthy and nutritious

Gifts at the party included bags, clothes, scooters, footballs and bicycles. Gifts were also given to children who would have done well in their schoolwork with the hope that it would encourage them to excel throughout the school year. Weekes returned to Canaries earlier this week to present clothing for children and adults.

Weekes has undertaken the initiative in several communities around Saint Lucia for the past seven years with this year being the first for Canaries. He says he and his organization have big plans for the west coast community that received a devastating blow in December 2013 when the Christmas Eve trough hit Saint Lucia.

“We’ve actually decided to adopt Canaries simply because we think Canaries needs more help than most of the other villages,” Weekes said.

Weekes visited the community last year after it was hit by the trough. On that visit, he donated close to 300 backpacks. He promised to return bearing more gifts. However, he said that the need always seems greater than what can be given.

“The funny thing is that the more we travel around the island, every other village tends to jump out. Now we’re hearing about Micoud and Dennery. So for now what we’ve decided to do is to try to focus on one village and see what it is we can do to solve some of the ills. Creating a blueprint from that and replicating it in the other villages is our intention,” Weekes explained.

TOCO’s plans for this year include building a perma-culture farm in Choiseul. Last year, Weekes brought in some perma-culture experts from the United Nations to take a look at the location and present a proposal to the government which gave its blessings to the project.

“We’ve been given three and a half acres of land in the Sab Wisha valley. So we’re building a perma-culture farm and a park on the beach. We just signed the final papers for the land.”

The not-for-profit farm will be used to teach children especially how perma-culture works and how they can feed themselves. Weekes believes that the new revolution is growing our own food. He said he has had a few meetings with the Ministry of Education regarding the school feeding programme and that his organization is helping that cause come to fruition.

“The intention is to see if we can get every school to grow some kind of farm so that the kids are aware about how this whole process works. We need to move them away from all these fast foods and everything else that’s killing us with diabetes,” Weekes said