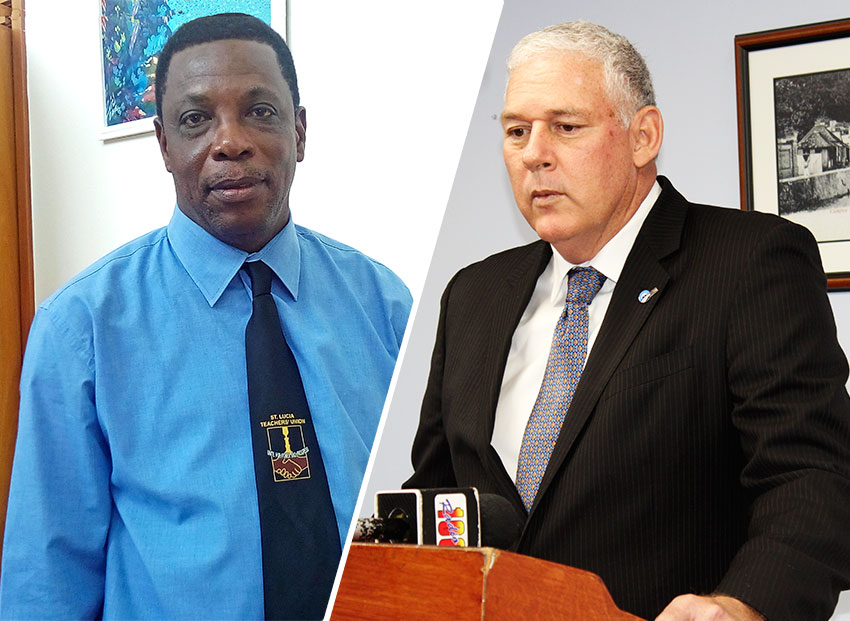 Tomorrow, Thursday 23 April, will determine who has the upper hand in the “fight” between public sector trade unions and the government over salaries/wages.

Government is calling for the scheduled date to pay salaries/wages, which is tomorrow, to be shifted to the 30th of this month. The trade unions are saying no way and calls on government to stick to the April 23rd schedule date.

The build-up to tomorrow’s showdown commenced several days ago coming to a crescendo when media houses yesterday, claimed that Prime Minister Allen Chastanet alluded that a decision was arrived at with trade unions to push tomorrow’s scheduled date for payment of workers to April 30th.

This spurred both the Civil Service Association and the Trade Union Federation into responding, denying that such a decision was agreed upon.

“Following from my last communique to you, I wish to bring the following to your attention. Having been involved in four (4) long and intense conversations with the Government regarding the fiscal position of Government and the measures which they intend to implement to remedy to the situation; our union has been placed in a very peculiar position.

The fact that we are in a partial shutdown and must observe the protocols established by the state with regard to social distancing, has made our ability to meet and discuss pertinent matters about our livelihoods and future extremely challenging.”

“Our Union has finally received proposals from government. To be precise, we received the proposals on April 19, 2020 at 10:30 pm. The proposals are as follows: –

Grades 1 to 6 gets their full salary

“Having received this proposal, the executive met on April 20, 2020 to discuss the matter. The executive in their wisdom could not accept such a proposal without first obtaining your approval or counter proposals.

“This decision of the executive was conveyed to the St. Lucia Trade Union Federation (TUF) at a meeting the same day. The TUF adopted the same position as all other unions faced the same predicament.

“Later that same day, we met with the government to articulate the position of all the public sector unions on the matter. The government maintained its position and so did all unions.

“The Government has indicated that they are unable to pay April 2020 salaries on the scheduled pay day (April 23) and is suggesting delaying pay day to April 30,2020. The TUF did not agree to that position and asked that salaries be paid April 23, 2020 as per original schedule.”

“The meeting ended without any of the unions agreeing to Government’s offer but agreed to continue the conversation on the way forward.”

“Members, my biggest concern is that given the protocols in place as a result of Covid-19 in relation to social distancing etc, we are unable to meet you in our usual fashion. I have given considerable thought to the ways in which we can meet our membership in an effort to get your input but have not been able to come up with any viable option. I would therefore ask members to suggest innovative ways we can effectively communicate so as to assist in decision making.”

“This matter is very serious and our future hinges heavily on the outcome. Your involvement as a general membership is paramount since this decision, in my view, should not be taken by the executive council nor the general council. I await your urgent response.”

The TUF President, Julian Monrose had this to say on the matter:

“It has been brought to the attention of the St. Lucia Trade Union Federation (TUF) that it was reported that the Prime Minister of St. Lucia indicated that a meeting with the Public Sector Unions Monday night decided to push back pay that was due on April 23 to April 30 in order to ‘complete the decision’ on Government’s proposal to the various Unions. The Federation on behalf of all its affiliates categorically denies that any such agreement was reached.

1) The Unions stated quite clearly to government that it had an obligation to pay public servants their full salaries and allowances due for April 2020. They reminded the government of the assurances given to that effect at a previous meeting.

2) The Unions rejected the government’s request to extend pay date from April 23rd to 30th, 2020.

3) In terms of the Government’s proposal, the Unions indicated that the late receipt of the proposal coupled with the current State of Emergency as well as the health protocols to be observed given the COVID-19 situation rendered it difficult to discuss the proposal with their member who have the ultimate authority in such a matter.

4) The Unions further explained to Government the hardships that acceptance of the proposal will cause for individual members and their families as well as the negative impact that such a decision would ultimately have on the economy of St. Lucia.

5) The Unions again proposed that Government agrees to work towards developing a comprehensive strategy to manage the current situation.

6) The TUF and the affiliates pledge to continue to dialogue with government and other social partners in finding solutions to the current crisis.

The Trade Union Federation and all its Affiliates reiterate the position that government should honour its commitment to pay public servants full salary and allowances by the published due date.”