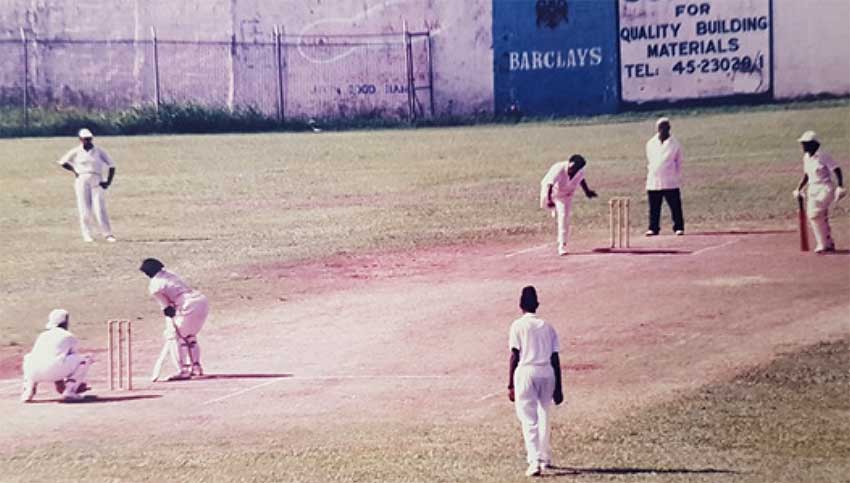 FORMER national cricketer and administrator Elizabeth William affectionately known as ‘Liz’ was one of four stalwarts to be honored by the Saint Lucia National Cricket Association (SLNCA) during its annual awards ceremony held recently at the Daren Sammy Cricket Ground (DSCG) Players Lounge.

A resident from the community of Bocage in Castries, she began her cricketing career at the age of 14 years at the Bocage Combined School with only the underarm version of the game being played at that time.

According to William she later joined the Spark Lite Rangers cricket team along with the Emmanuel sisters, Antonia Arthur, Roseline Emmanuel and Unice Cherubin and soon after she became captain.

During that era, Spark Lite played overarm cricket whilst most of the other female teams on the island continued to play underarm. On Sundays, William would take her team out to play exhibition matches in an effort to encourage the other teams to change to the overarm version of the game, which they eventually did. After that time there were a total of eight female teams, (Spark Lite Rangers, Toughest Wrecking Crew, Dragon 17, Bouton, Choiseul, Fond Assau, La Couville and Monchy).

William said, “It was in 1987 when i received a call from the Ministry of Sports at the time, now Ministry of Youth Development and Sports, inviting the Spark Lite cricket team to tour Trinidad and Tobago as guest of the Merry Girls Cricket Team. The offer was graciously accepted as a means of helping to broaden the scope of Women’s Cricket in Saint Lucia”.

In an effort to have a strong team to travel to Trinidad and Tobago and to compete at the highest level, we included some players from other teams to form the representative team. Whilst in the Twin Island, I was invited to a meeting geared towards reviving women’s cricket in the region. It was at this time that I was asked that an association be formed in Saint Lucia and to apply for membership to the Caribbean Women’s Cricket Federation (CWCF).

Upon her return to Saint Lucia, William immediately set the wheels in motion and the Saint Lucia National Women’s Cricket Association (SLNWCA) was formed with Elizabeth William as its President.

In 1988, Saint Lucia first, captained by Williams participated in the Female Regional Tournament. A few years later she was elected as the 2nd Vice President of the Caribbean Women’s Cricket Federation. During her tenure as president of the SLNWCA it was very difficult to get sponsorship as women’s cricket was not very popular and it took a lot of effort to get the necessary funding.

After a few years the female cricket team started to excel and their popularity grew as well. She served on the Federation when the men and women associations in every territory had to merge as was mandated by the International Cricket Council (ICC): William continued to serve on this male dominated association as the 3rd Vice-President with responsibility for Women’s Cricket.

Though she did not go on to play for the West Indies team in her era, William represented Saint Lucia for 12 consecutive years. She once held the highest individual score of 115 in a local match before it was broken by Verena Felicien; in another encounter she scored 43 not out and picked a five wicket haul in the same match. On the regional scene the right arm off spinner picked up 5 wickets for 25 runs against Trinidad and Tobago in 2000.

Upon retiring from the sport, William was asked to serve as the manager of the Women’s Team, a position which she held for 4 years. She also served on the Local Organizing Committee (LOC) which was created whenever there were Regional or International cricket matches in Saint Lucia.

In terms of Qualification William successfully completed two coaching courses, one in Trinidad and Tobago and the other in Saint Lucia and obtained a Level One Coaching Certificate.

She has served in various positions during her tenure, including coach of the first Saint Lucia Youth Team and Manager of both the Junior and Senior Women’s teams, Umpire, Scorer and Selector; she is extremely grateful to everyone who provided support to her during her cricketing life.

In terms of advice for young aspiring female cricketers, William said, “Take your training seriously, and remember discipline is key, it does not matter how many runs you scored or wickets have taken, you will get nowhere. You need to remain focus and continue working hard to reach the top”.