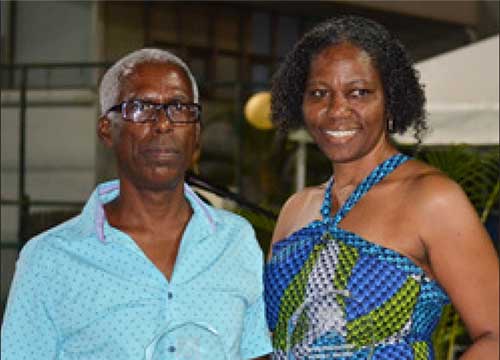 FOR the first time in its history, the Saint Lucia Tennis Association (SLTA) Inc. held its inaugural awards ceremony on Court No.1 at the National Tennis Centre adjacent to the Daren Sammy Cricket Ground this past Saturday 25th January 2020, and without any rain interruption.

The evening saw three-time Sportsman of the Year (1984/91/92) tennis player Vernon Lewis being inducted into the Saint Lucia Tennis Association Hall of Fame; and the announcement made for the Junior and Senior Tennis Players of the Year, along with the posthumous award.

Stephen McNamara who addressed the gathering said, “This event truly showcases the commitment that all of us have shown towards our sport. In 2010 we were gifted and entrusted with this valuable facility which we call the home of lawn tennis in Saint Lucia, thanks to our friends the Embassy of the Republic of China on Taiwan who joined with our government to deliver this facility to us. Today we can stand proud and boast of our own home and the many talented players which it has produced”.

He continued, “With the passage of time it is not on every occasion we speak that we thank the Government and people of Taiwan for their generosity in donating this facility, but I would like them to know on occasions like this, it’s appropriate that they should know, that their generosity will never be forgotten as long as tennis is played in Saint Lucia. When the history of tennis is written, their place in that record will be assured.

“I am delighted we can honour our very own stars across our nation; our young athletes continue to participate/compete in a number of local, regional and international tournaments. You, our young people, have made us extremely proud. This evening we are here not only to announce the winners of the 15 main awards, but also to congratulate all who have been nominated in furtherance of the adage that winning is not the only reason for participating; playing the game and giving of your best is of equal importance,” he noted.

McNamara ended by saying, “A huge congratulation therefore to all the finalists, you have definitely set an admirable benchmark for other players to emulate, and we hope you will continue to achieve brilliance not only in our sport but in all the other spheres of your lives”.

Director of Sports, Patrick Mathurin congratulated all the awardees on the night.

He stated, “This is a dream that is coming true for the Ministry of Sports; as a Ministry we have always indicated that every single association should have its awards. It is something we have pushed for every year, and I am very pleased that the Tennis Association has joined the bandwagon of the other four associations who have been consistent to do so. By the time my stint is over in a few years, we would have moved from those five associations having awards to the other 18 sporting associations coming on board”.