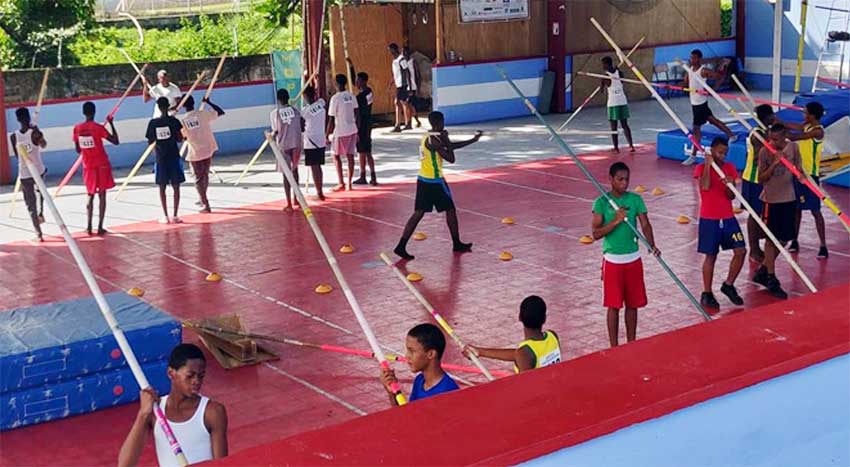 The event saw 38 students from eight schools participating including the addition of Stanley Jon Odlum Secondary School for the first time at a clinic. In total, over the years, 15 secondary schools have taken part in one or more clinics as teachers and coaches work together to introduce more youth to the event.

Students went through a warm-up and worked on a number of technical drills before spending the last half of the clinic applying their learning over a soft crossbar. While the experience was new for some, other boys and girls have developed confidence and identity in the sport and are clearly on their way towards a strong showing at next month’s exhibition championships, currently planned for the final week of school, and integrated into the inaugural Saint Lucia Pole Vault Summit and Street Vault. More details on those events will be coming in the weeks ahead.

Programme Director Andy Behl thanked the various stakeholders at all levels who worked hard to ensure the clinic was successfully executed in the lead-up to December. This included the Patricia D. James Secondary School Principal, leadership and staff for their continued partnership with Mopo A.C. in the operation of the Jumps Center; Chief Education Officer, Fiona Mayer who provided communication support to the schools, the Ministry of Youth Development and Sports for the endorsement of the event and transportation support for the students from the South; the Saint Lucia Athletics Association for bibs; the teachers at the schools who were able to bring and organize their students in preparation for the day, and the participating teachers and coaches who co-led drills and worked with the athletes over the course of the afternoon. These individuals include Coach Shem Edward, Mr Jules, Mr Rodney, Ms Herman, Mr Myers, Mr Clovis and Mr Yarde.

“The key objectives for the day were to ensure students were registered so we could establish a clear database of the island’s vaulters, schools, and dates of birth for relevant competition categories,” said Andy Behl about the key objectives of the Pole Vault Programme.

He added, “Students were briefed as to the road ahead over the next six weeks, including a multi-day clinic during the last week of school that culminates with the Boys and Girls School Championships and will provide a qualification for the street vault.”

He continued, “This clinic was the first time this group of students was able to come together since the previous clinic in March and allowed them to reconnect with the sport and help us build momentum for December.”

Aside from the school championships programme, Behl said this group of students represents the future of the sport at the CARIFTA level for the next 5-7 years.

“From this perspective, it is quite apparent that our sport has never been in a better position in its modern era,” he said. “Through the clinics earlier in 2019 we were able to connect with students who are now in the national jumps programme for 2020-21. While the boys in this group assisted the clinic, it is these participants who would make up the competitive base for 2022-2025… This is all part of a much bigger process and the ability to implement this clinic was a key stepping stone that was based on teacher feedback and team administrators who saw the fit in the bigger picture and were able to deliver,” noted Behl.