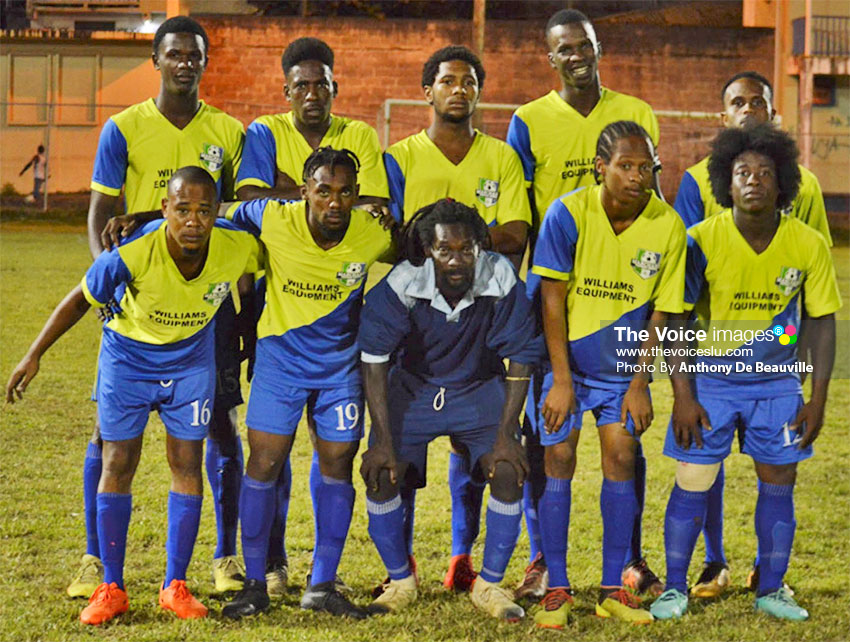 From the first whistle of female referee Sabina Kirton to commence the rivalry on the pitch in an encounter dubbed “Clash of two Titans”, No. 19 Romiel Felix did not waste time when he put the defending champions Marchand into the lead in the first minute of play. It was soon 2 – 0 when Felix scored his second in the 12th minute which was the half time score despite VFS’ attempts on three occasions to cut the deficit.

On the resumption, is spite of playing short, VFS put up some resistance but this was insufficient as No.9 J’ Nai Lesmond sealed the deal in the 85th minute, thus giving the defending champions a well-earned 3 – 0 victory.

“Starting with 10 players and not a regular goalkeeper would obviously put us at a disadvantage,” Emmanuel Belase VFS Head Coach said speaking about what transpired during the 90 minutes of play. “I think it all started with the motivation leaving Vieux Fort. We came up because we had to and not because we wanted to and that’s based on the non-response of unavailable players.”

He continued, “The first two goals conceded were mistakes committed by us because directives in the dressing room were not followed. Notwithstanding, we turned up a better performance than what was expected.”

He added, “Credit has to go to Marchand for capitalizing on our deficiencies. Even with 10 players we still should have performed better and maybe the final outcome could have been different.”

What next for VFS with four games to play?

“It is what it is now; hence we now have to pull all the stops in aiming to win our remaining four games,” he said. It’s all about motivation. Believe it or not, there has been a level of complacency among the players even before the Blackheart tournament.”

Speaking on the officiating and the hype leading into the encounter, Belase noted: “The officiating was in no way responsible for our defeat; the quality of play was no indication of what was expected…. Vieux Fort South may be slightly down but not out. We aim to be in the top four at the end of it all and take it from there”.

The VOICE also spoke to the President of the Marchand Football League, Christopher Clarke who felt the performance of both teams stood out.

“It was a good performance by both teams, the difference being that Marchand was able to convert on early opportunities putting VFS under pressure from the onset,” he said. “Despite playing a man short from the start, VFS defended aggressively for most of the game but we were worn out by Marchand’s constant attack and relentless pressure in the final third, resulting in a late goal to seal the win.”

In terms of players not being available from the start, he commented: “VFS also started with 10 players as well, we are also dealing with a few injuries, discipline and travel. Our prolific scorer is off island.”

What’s next for Marchand? A top of the table clash with Gros Islet on Saturday 2nd November at the Gros Islet Playing Field.

Meanwhile, in the second encounter played on the evening, Gros Islet continued their winning ways, coming from 1 – 0 down to defeat Central Castries 3 – 2 in a hard fought encounter.

Dillon Lucien put Central Castries ahead in the 27th minute and despite Gros Islet’s attempts to equalize no further goals were scored and the half ended in favour of Central Castries.

On the resumption, both teams upped the tempo but it would be Gros Islet who would seize the initiative when their captain No. 11, Eden Charles, equalized in the 61st minute; it was soon 2 – 1 in favour of Gros Islet when Charles found the back of the net for the second time scoring in the 75th minute.

With 15 minutes left in the game, Central Castries never for once gave up and was back in the game when No. 4 Kinsley Henry found the much deserved equalizer in the 86th minute. Gros Islet on the other hand had other ideas and quickly nosed ahead when their No. 7 Amaris Lorde scored in the 87th minute to seal victory for his team and in the process claimed all three points at the end of referee Vivian Robinson’s final whistle.