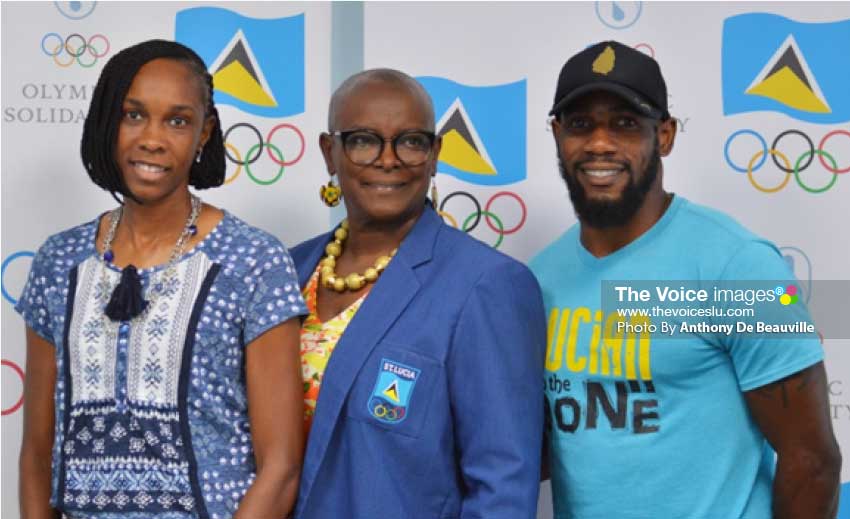 IT was by no means a fluke winning one gold and one bronze medal at the Pan Am Games in Lima, Peru in August, by Saint Lucia’s reigning Senior Sportsman and Sportswoman of the Year. Levern Spencer won her gold medal in the High Jump and Albert Reynolds’ bronze was for the Javelin.

The Saint Lucia Olympic Committee (SLOC) is known to provide Saint Lucia athletes who medal at major games with rewards to keep them motivated to continue excelling. Tuesday morning was one such occasion with a brief ceremony held at the SLOC Headquarters in La Clery where the two athletes were rewarded for their podium finishes. Levern Spencer received a cheque for EC$10,000 dollars, while Albert Reynolds received EC$5,000 dollars.

SLOC President Fortuna Belrose said before the cheque presentation, “Every year the Olympic Committee evaluates its plans as it looks towards the future for sports and 2019 was no exception. We had a great year in terms of the work happening within the organization and performances from our athletes and we are indeed grateful.”

She continued, “The public needs to understand that the SLOC as an organization is responsible for the participation of Saint Lucia in four major events: The Olympic Games, the Pan American Games, the Commonwealth Games and the Central American and Caribbean Championships; these are the games we participate in. The athletes that participate in these championships are usually athletes that excel at the highest level within Saint Lucia and they have to qualify. Albert and Levern both qualified to participate in the event.”

According to Belrose, for Levern, this was her fourth time participating in the Pan Am Games, and this is her third medal for Saint Lucia, but more importantly she was able to retain her gold medal position.

Speaking directly to Levern she noted, “We want to congratulate you. It’s a rare feat for Saint Lucia, because we don’t have athletes performing at that level consistently for the country. You have been that model in terms of persistence and perseverance over the years and we continue to celebrate you as an athlete and Saint Lucia is proud of you.”

“The significant achievement of Levern was doubling her efforts at the Pan Am Championship this year, considering all the other circumstances,” she added. Levern, you showed the rest of the world and the Pan Am region that you got to be stable to be able to make it happen and despite all that was happening including the weather and the other issues around the games, on the ground you were able to stand tall and that is a great testimony to who you are and what you bring to sports. We want you to be that shining light for the young people of Saint Lucia because of that mentality that you have with respect to success and going after your goals.”

During her turn at the podium, Levern thanked the SLOC for recognizing her performance, and that of Albert’s, in a tangible way. After she received her financial reward, the athlete stated: “I defended my title as Pan Am champion; it was a challenge considering the weather. I tried to stay positive and focused. I just tried to go out there and give of my best. Going to the games I knew what amount of pressure I was under. I cleared 1.87 metres and that was good enough for the gold medal. I am really happy I was able to defend my title and bring a gold medal for Saint Lucia.”

Additionally, “I do appreciate small gestures and I am going to continue working hard. I am looking forward to 2020, hopefully to represent Saint Lucia at the Olympic Games in Tokyo, Japan.”

After that it was over to Albert Reynolds. Belrose had described Albert’s situation as “a special case” earlier in the proceedings, expressing: “He came to us (SLOC) and said he wanted to train in England, but when we reviewed the situation and looking at all the issues around him we felt Grenada was the better place. Grenada has a High Performance Centre for throwing, and they do have quite a number of outstanding throwers at the world level.

“From the SLOC’s standpoint, we needed to give him that opportunity to go down to Grenada and work with a coach who knew him well and could inspire him. We challenged him and gave him the opportunity, and I must say the challenge worked.”

According to Belrose, Albert promised at the time to give it his best shot and on the day of competition everyone could have seen the determination on his face and that he was prepared to deliver.

The SLOC chief had a message for Albert: “We are very grateful that you came back with a bronze medal and are inspiring a lot of youngsters to get involved in the art of throwing the javelin. We want to commend and congratulate you and we hope that you continue training as next year is the Olympics.”

In thanking the SLOC Albert said, “This season has been a challenging one for me. At the Independence championship I threw over 80 metres for the very first time and it was a sign that it was not over for me. I had some doubts leading into the season in terms of my preparation and whether I would be able to execute at the right time. But right after the championship, I had a muscle strain (bicep) and it posed a threat to me participating at the Pan American Games. I still remained determined…”

According to Albert, he approached the SLOC after the plan for England did not go through. Grenada was the next option with Coach Paul.

“The coach said Grenada would have been next best thing for me because of the atmosphere I would have gotten down in the Spice Isle,” he said. “The stint in Grenada was short; it was very effective, it was a lot of work, not too strenuous, but just preparing mentally for the games.”

In spite of the conditions in Lima, Albert said he knew he could have done something spectacular for himself and his country.

“Saint Lucia can produce,” he said. “We do have athletes here. We complain about what we don’t have, but we forget what we have. That is what I used throughout the years trying to get better because I knew when I got the opportunity I would have the base and the foundation; all I needed was more experience and more learning at a different level.”

He concluded by saying: “I am really thankful for the SLOC trusting in me to head over to Grenada and performing. I do apologize that I had to wait until the last throw, but it was overwhelming to participate and to win a medal within a short span of preparation prior to the games. In the coming year I will be a lot more mentally prepared, and I know I will continue representing my country to the best I can.”