By Alejandro Simancas Marin (Ambassador of the Republic of Cuba) 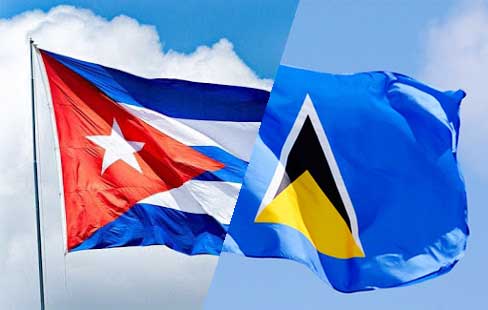 FORTY years ago, on August 24th 1979, the Executive Committee of the Council of Ministers of the Republic of Cuba adopted through agreement number 570, to establish diplomatic relations with Saint Lucia.

Then on both sides the official date of 23rd August 1979 was recorded as the day of the establishment of relations between Cuba and the still young and independent state of Saint Lucia. That step of great importance that we celebrate today, was not the result of political and diplomatic formality; but rather it was a response to the vision of then President and historic leader of the Revolution, Fidel Castro; that the Caribbean and of course, Saint Lucia, are our immediate family, with which we share the geographical, historical, human and cultural environment; and, therefore, we owe them a deep feeling of solidarity.

Before that date, the history of thousands of Saint Lucians was told, in the early years of the twentieth century, who sought work in Cuba. Then, during the 1960s and 1970s, the exchange between our peoples increased and bilateral collaboration began. This led many people from Saint Lucia to study in Cuba and even others were nourished there by the feeling of independence that was forged not only in the region, but throughout the world and in Africa in particular.

However, it was not until after August 23rd 1979 that our countries built a new stage of high level exchange and collaboration. Our foreign policy towards the Caribbean was put into practice and a strong cooperative effort was carried out, guided by the sense of solidarity and cooperation, which even intensified during the most difficult years of the Cuban economy; caused by the disappearance of the socialist trading system and the strengthening of the blockade by the United States.

It would be very difficult to give a full account of the history of solidarity that we have built over the years, and perhaps the cold statistics do not reflect the sense of brotherhood between people on either side of our countries.

During all these years the cooperation in a sector as noble as medicine, has been permanent and growing. In 2001 the medical collaboration began which has made it possible to maintain an important group of Cuban health specialists in Saint Lucia, and today they continue to work mainly in the Victoria and St Jude Hospitals. The statistics of their work reflect that from 2014 alone, 635 lives were saved, 211,693 consultations were attended and 10,362 surgical operations performed.

From 2005 to 2009, 3,643 Saint Lucians underwent operations for their sight in Cuba as part of “Operation Miracle”. Then the Ophthalmology Center was established at the Victoria Hospital, which celebrated its tenth anniversary of uninterrupted work this year.

Our doctors have been the best exponents of human sensitivity in the direct exchange with the people of Saint Lucia with whom they have shared their happy moments and also the sad ones.

Since 1980, just months after the establishment of bilateral relations, a scholarship program was launched, through which more than 700 Saint Lucians have studied in Cuba, including 571 doctors who are currently attending to their population. We have maintained this program, which is very effectively coordinated with the Government of Saint Lucia, and accordingly a new group of 10 students is leaving for Cuba in the coming days, 7 in total to study medicine.

Our cooperation also covers other sectors such as construction, sports, culture, agriculture and the environment. More recently we highlighted education as an area of high social impact with the implementation of the Cuban literacy program “Yes I can”.

On the other hand, we have forged a strong political dialogue of a high level, fruitful and mutual respect that has allowed us to exchange and chart strategies based on common objectives and challenges, both bilaterally, as from the perspective of a region facing common challenges and interests. More recently, the Cuban Foreign Minister Bruno Rodriguez visited Saint Lucia this past June, where he was received by the main authorities from the State and Government of Saint Lucia.

We uphold fundamental principles of international law that have guided our cooperation in the multilateral field, such as the sovereign equality of States and the free determination of peoples, the strengthening of multilateralism and the defense of peace, as reflected in the proclamation of the Community of Latin America and Caribbean States declaring the region as a zone of peace.

We are small island developing states in an environment of common aspirations and interests, in which it has been and is essential to defend unity above all.

We also appreciate the joint work we have undertaken within the framework of the Association of Caribbean States, the Community of Latin American and Caribbean States and the impetus that Saint Lucia has always given to the excellent relations exhibited between Cuba and CARICOM today.

We maintain a deep sense of gratitude to the government and people of Saint Lucia for their support for our demand to end the economic, commercial and financial blockade from the United States that seeks to limit the development of our country. At a time when the US administration is trying to escalate the economic war against Cuba to absurd levels, we do not forget the expressions of support that we have always received from Saint Lucia against this policy, which has been classified as genocide by the General Assembly of the United Nations.

In Cuba we deeply admire Saint Lucia’s nobility, talent and desire for progress; we recognize the tenacity and dedication that its men and women have engaged in and are engaged in the work of the economic and social development of their country.

On this 40th anniversary, we express our gratitude to the highest authorities of the State and Government of Saint Lucia. We recognize the Government’s commitment and willingness to strengthen bilateral relations. There have been numerous exchanges of official visits between the two countries, and the understanding and willingness to continue strengthening the base of friendship in our ties have always prevailed in dialogue. We appreciate the presence of the Prime Minister, the Honorable Allen Chastanet, at the funeral of the historic leader of the Revolution, Fidel Castro, whose guidance was fundamental in building the bilateral relationship with the sister nation of Saint Lucia.

Nor do we forget the courage and dedication of many personalities throughout these years, who in difficult moments raised their voice in defense of Cuba and our relations. Among them was the Honorable Kenny Anthony, then Prime Minister, who holds the “Jose Marti National Order”, the highest Cuban state award to a foreign leader.

Nor do we forget so many friends from Saint Lucia who studied or worked in Cuba and made Cuba their homeland and became brothers and sisters. There are no doubt millions of shared stories and common anecdotes that unite us. We especially recognize the Humanistic Solidarity Association (Saint Lucia – Cuba) and its members, who have become the best exponent of the brotherhood between our peoples and perennially work in a selfless and exemplary manner.

Our President, Miguel Diaz Canel, has confirmed that our relationship with the Caribbean and with Saint Lucia is based on the cherished principles of solidarity, friendship and cooperation. Those are the principles with which we will continue to work towards the future and from which we can reaffirm that Saint Lucia can always count on the eternal gratitude and support of Cuba.

Our great Caribbean and world poet Derek Walcott said that an island was a poem. We are two islands, but the Cubans and Saint Lucians together have shown that when we unite as brothers and sisters in the common effort, we are one poem bonded together.