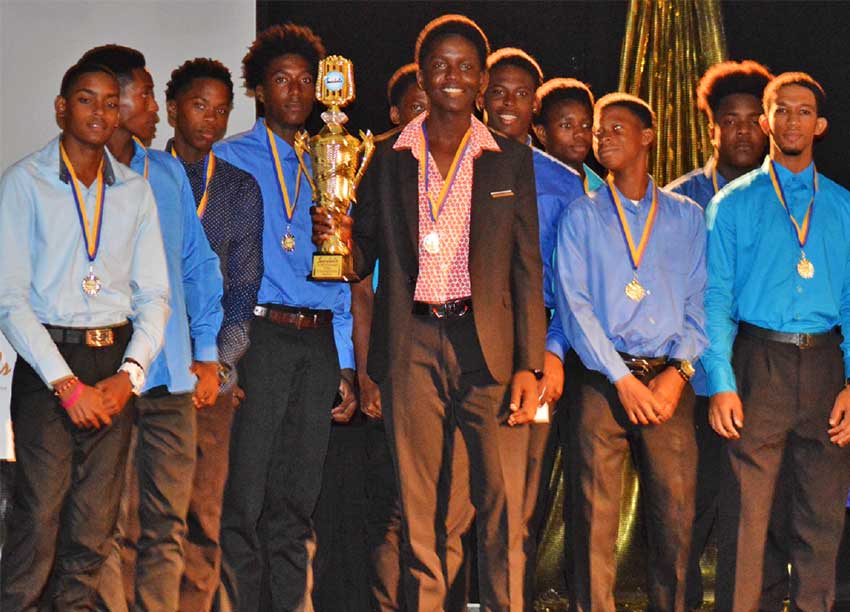 The curtains came down on the 2019 Sandals sponsored Saint Lucia National Cricket Association Under 19 Inter District 50 Overs Cricket Tournament with a prize giving ceremony at the Sandals Halcyon Beach Resort and Spa.

Managing Director of Sandals Resorts Saint Lucia Winston Anderson, assured stakeholders of the company’s commitment to helping where it can.

Anderson said, “With respect to our sponsorship of this event, I can tell you that at Sandals, we are all too aware of the importance of corporate citizens stepping in to provide support for our young citizens. I said at the launch of the tournament that through this sponsorship we hope to not only raise the profile of the game, but provide a springboard for some of our young players to gain national and ultimately regional selection.”

Sports Minister Edmund Estephan commended Sandals for its support of not just cricket, but several other sporting disciplines in Saint Lucia.

He went on to urge the young players present  to maximize the value of such support, and allow it to motivate them to carry on and aspire for selection on the West Indies senior cricket teams.

Estaphane said, “It is pleasing to see that the SLNCA is continuing to invest in its young cricketers. The staging of this competition is a critical step in ensuring that these young men progress to be great cricketers.”

SLNCA President Julian Charles before introducing the feature speaker mentioned the likes of Lee Solomon, who had three centuries and Simeon Gerson’s nine wicket haul. He also made mention of AckeemAuguste for scoring 92 runs on debut in the Windward Islands Senior Cricket Tournament and female cricketer Qiana Joseph for dominating the West Indies Under19 Cricket Tournament.

At his turn at the lectern, the former West Indies cricketer recognised Sandals, which is also the Principal Sponsor of Cricket West Indies, for investing in the sport at the developmental level.

Ganga said, “In today’s world, in the current economic situation, you very rarely find local and regional organisations having the bandwidth to support sport, to sponsor sport, to think about a ‘one Caribbean’ in the sense of West Indies. Sandals you have done it, and I personally congratulate you. You have contributed significantly towards the development of our region, towards our cricket and towards memories that we will cherish for a long time.”

Ganga said, “Gayle played close to 200 first class matches and scored two triple centuries in Test Cricket, which enhanced his overall performance in all formats of the game.

“For many of you who value T20 cricket in your young careers as being the pinnacle and then you put some consideration into 50 over cricket and four day cricket, I say that needs to change,” he said.”

Ganga also touched on the training and coaching aspects: “It is a very different era than what we have been brought up in, and I don’t think we have yet established a West Indies cricket way of coaching.”

Ganga again warned the players present about trying to emulate others. He suggested that they try to be the best talent they could be.

In terms of player routine, Ganga told his audience, “It is scientifically proven that when you are in a relaxed state you achieve maximum performance.”

He specifically mentioned a team mate of his, “I am not going to call out any names, but I remember in Trinidad and Tobago when we were playing, there was a certain player, and he had a particular routine before he played a game.  He was so hell bent that it was crucial for him to score runs; that he had to have time to go visit his girlfriend before he played a game. Let me add, and it might sound really funny, it was imperative that he had a hickey on his neck before he played. Now tell me how that impacts on a guy performing…”

Ganga then moved to visualization. “You have to feed your mind with positivity. Research has shown in sports that visualization is essential in achieving success.”

As a member of the Trinidad and Tobago Cricket Board, he left no stone unturned firing from all cylinders; it was the turn of sports administrators. He said, “Some administrators are stagnated in the manner in which they do things.  There are some who are not creative and disconnected with the evolution of the game, while there are many who are forward thinking and very efficient in how they do stuff. I find that far too many of our administrators are not up to speed with the modern game.”

In terms of length of time in office and transparency he said, “I still feel strongly that there should be term limits of leadership in our cricket. I still think we should improve on our transparency and accountability when it comes to administration of the game. I still think there is room and bandwidth for all of us to collaborate a lot more especially in tough economic times, and that is something that should be done in a respectful manner without a personal agenda. We must see ourselves as administrators, as facilitators and not persons who are keen just to have office.”

Following Ganga’s 40 minute speech was the presentation of awards. Top order batsman Lee Solomon (Gros Islet) took home the MVP of the Finals, Tournament MVP and the award for Most Runs.

Babonneau captain and opening batsman, Caleb Thomas was MVP of the Semifinals (Babonneau versus South Castries); while wicketkeeper/batsman for Gros Islet, Garvin Serieux was MVP for the Gros Islet versus Central Castries match.