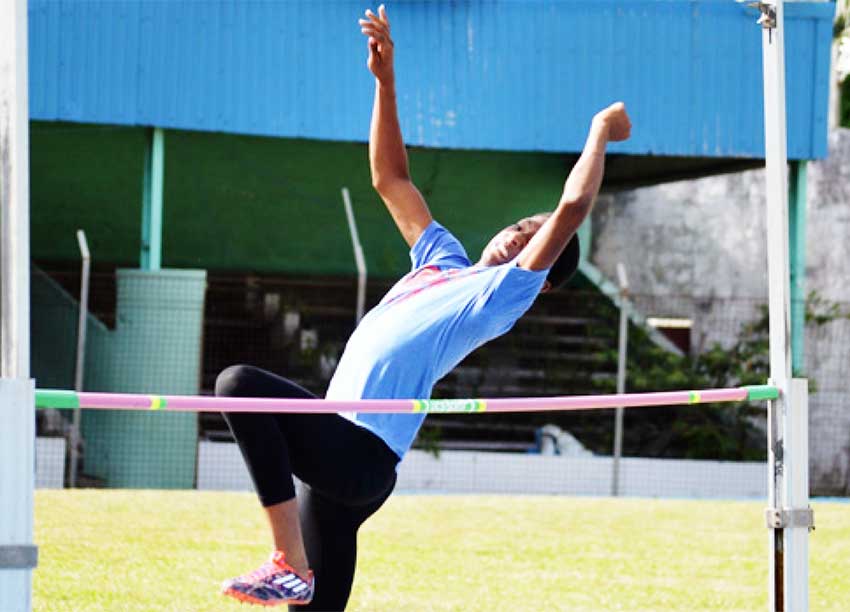 Saint Lucia Athletics Association’s (SLAA) President Cornelius Breen has expressed that there is cause for concern at this time for athletics in Saint Lucia. Breen spoke to The VOICE on Saturday 18th during the Northern Zone qualifier for Under-14 athletes at the Mindoo Phillip Park.

On the day, over 200 athletes participated in a number of events including the Pentathlon/ Combined and Individual events.

According to Breen, hopefully this year Saint Lucia will be represented at the North America, Central America and Caribbean (NACAC) age group championship in El Salvador. This year the Northern and Southern Zone qualifiers are tailored to suit the age group championship and come the finals on Sunday 9th June, athletes between 11-12 and 13-14 years will be doing the Heptathlon.

At the National Individual Track and Field Championship slated for late June Breen said, “The top eight athletes in the Pentathlon/ Heptathlon will be invited to compete over the two days at the George Odlum Stadium (GOS)”.

Breen added that the SLAA has provided athletes with an opportunity to get much needed exposure and to fine tune their skill ahead of the grand finals.

The top athletes will battle it out in the field events. There will be two heats in each event and based on the best times the top three athletes will get medals.

Speaking on areas of concern for the SLAA, Breen expressed “We are still in the red zone. We are not where we want to be, but we are holding our own in terms of staging most of the events on the calender of activities for 2019. The challenges we are having are that of our overseas engagements; we have to make some decisions as to whether we go or stay home this year or forgo some of the championships”.

He added, “At present we are trying to get our affiliates/clubs to host some of the events in order to cut costs. For the qualifying round, we have asked them to bare the transportation costs and we will cover the cost for transportation for the grand finals.”

According to the SLAA Chief, his organization will be looking to have a few fund raising activities in order to generate some much needed finance as they  need to get the SLAA Secretariat up and running with a full time staff to take care of the organization’s business.

Once dubbed the 13 and Under Games, the event was in the past one of the most talked about track and field championships for juvenile athletes. In terms of sponsorship for this and other upcoming events, Breen expressed, “Hopefully before year end we will be in dialogue with some potential sponsors to see how best we can get a sponsor on board. We are definitely trying to win back the hearts of 1st National Bank to see if they will be interested in hosting the National Under-14 Games. They have always been a partner to us, and they have always shown a keen interest in the games, particularly the 14 and Under event.”

It must be noted that the last time Saint Lucia medaled at the CARIFTA Games was in 2015 in the Under-20 male category, with Denzel St Marthe winning a bronze in the javelin throw, likewise Ace Louis in the high jump.

Alphonse made the girls U-20 400 metres final. She finished fifth in the preliminary round running in a time of 55.09 seconds. In the finals, she crossed the line in sixth place, clocking a time of 55.01 seconds.

ZoyaJn Marie, a debutant, finished seventh in the girls U-17 discus throw, her best mark 32.55 metres; while KhailanVitalis turned in a mark of 1.80 metres to tie for seventh in his first CARIFTA outing.

Middle distance runner, 18-year-old Tarik Xavier was fifth in the boys U-20 1500 metres run, which was contested as a straight final. Xavier finished 16th in the 800 metres preliminaries, running 2 minutes 12.98 seconds.

So where does that put Saint Lucia’s track and field athletes in terms of preparation for these games in 2020 in Bermuda? Those at the helm know too well that our major challenge will be to start preparing our athletes as soon as possible for Carifta 2020, so we will be well represented on the track. We have eleven months to get it right!