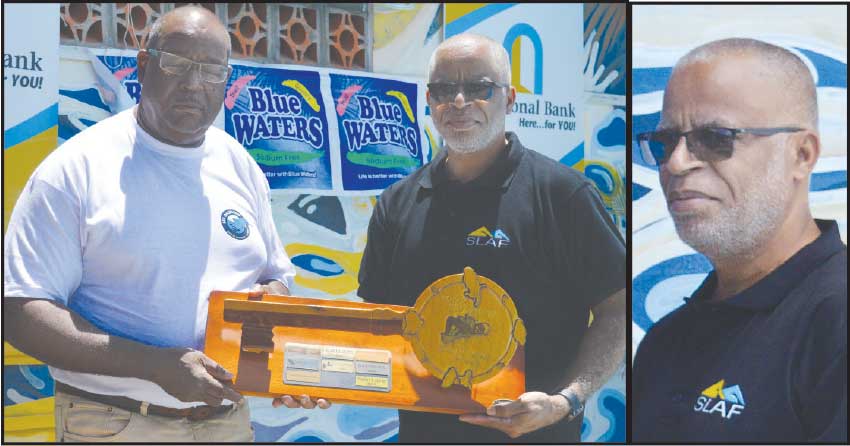 The Rodney Heights Aquatic Centre came alive this past weekend when the Saint Lucia Aquatics Federation hosted the 26th Edition of MIAGE and the second since 2005 when Saint Lucia last hosted the event.

On day one, (Saturday 6th) the opening ceremony proved to be one like no other with a synchronized swimming exhibition put on by the defending champions Longvillier Club of Martinique who eventually won the 26th edition of the MIRGE with a whopping 29,698 points.

At the official opening of the meet, SLAF President Eddie Hazell welcomed the foreign swimmers and supporters to Saint Lucia, expressing the importance of our islands maintaining its current ties. He stated that he looked forward to strengthening its relationship.

Representing 1st National Bank was Robert Fevriere, who said the bank continues to support Youth and Sport. He welcomed the swimmers and encouraged them to swim hard and continue to strive to succeed.

During the awards ceremony, there was a small token of appreciation exchanged between the Longvillier Club and the Saint Lucia Aquatics Federation and medals were awarded to the top three swimmers in each event. Trophies were also handed over to the Best Male and Female teams, top three relay teams and top three overall championship teams.

“The MIAGE met our expectations,” he said. “We were fortunate to host 89 swimmers from Martinique/Guadeloupe. In our assessment, the visiting teams enjoyed the occasion /meet and are hoping Saint Lucia will put their hands up to host the MIAGE again.”

He added, “At the opening ceremony we saw a beautiful rendition of synchronized swimming by the Longvillier Club of Martinique.  This is an event we are looking to introduce in Saint Lucia apart from the Open Water event.  The performance was breathtaking, and a first for our visitors and swimmers. We are hoping in our future swim meets we can invite the Longvillier Club to continuously come to Saint Lucia to do presentations so we can get the interest of artistic swimming to our swimmers and not only to the general public. SLAF believes our swimmers should have a different discipline than the regime they presently do; just swimming.”

Guadeloupe has accepted the Keys to host the MIAGE in 2020. According to Hazell, Saint Lucia needs a breathing space in order for the SLAF to do a full assessment to make sure preparations are in order to host a better event the next time around.

Hazell said, “The MIAGE is set up to give a lot to the young swimmers who don’t usually get to compete at the OECS/ CARIFTA and CCCAN Swim Championship, to get the opportunity/exposure, to come in and improve on their times and their strokes and have fun at the same time.”

Is this a wakeup call for Saint Lucia in terms of the level of competition from the French teams?

“We could have seen it,” he admitted. “The French are very strong in endurance; they train five days a week and every day they do open water swimming. Afternoon sessions are strictly pool training, so they place a lot of emphasis on distance training. You could have seen it in the 400 meters; they outclassed our swimmers, although our swimmers kept up with them. We are not accustomed to that level of training because obviously, we do not have the type of facilities and we do not have that type of regime in terms of training for our swimmers.

“Part of our development plan is to incorporate that aspect of training. We are constrained by a number of things and one is the cost of swimming in Saint Lucia. It was discussed with us by the French authorities. They realise it is a costly affair for Saint Lucia to put on the MIAGE.”

Hazell concluded: “When you take on the responsibility to host a meet like this obviously all the expense is on you from accommodation to food. When the French did their budget to host theirs they realized Saint Lucia’s was way higher and when we showed them the breakdown they understood. We have serious limitations in terms of cost in putting on anything in Saint Lucia.”