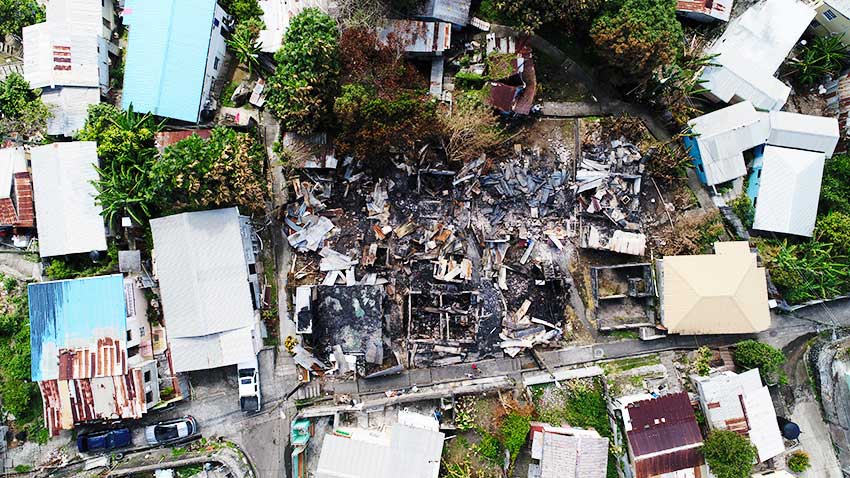 The Rose Hill fire struck on the very first day of 2019. Before daylight, some ten structures inhabited by people went up in flames before the first fire tender arrived. The emergency fire service was unable to put out the fire as quickly as it possibly could, due to parked vehicles on each side of very narrow roadsides. The stories from and about people who escaped unhurt are well worth reading and listening to. However, the losses were immense — many people escaping with only the clothes on their backs when the emergency alarm was sounded.

The aerial VOICE photo shows the small overcrowded lot today, in the aftermath of the January 1 furnace. Fortunately, no one died. But even with such luck, how safe are residents of Rose Hill and other similar unplanned and un-developed areas in Castries and country-wide?

The families and victims of the New Year’s Day Rose Hill fire, have not stopped speaking about the tragedy that according to Castries Mayor, Peterson Francis, could have easily dwarfed the historical Castries Fire.

A few days after the blaze was extinguished, The Voice visited the grief stricken community, smoke still rising from ashes of the burnt homes; a stark contrast of the houses that once sheltered families and friends in the area for decades.

Speaking during a visit by this reporter, community elder, Omer St. Rose with bucket of water in hand was still working feverishly to extinguish what was left of the disaster.

“I had no time to save anything,” he lamented.“Clothes, furniture, work equipment, everything gone.” A sculptor by day, St. Rose was thankful for the calls by his neighbours to vacate the burning home. “I was asleep when I heard them calling. By the time I opened my door I saw the fire, I knew I had to get out and there was no way I could save anything.” Even in his time of despair, St. Rose still managed to crack a smile when he revealed that his dentures with his gold teeth were also a part of the personal items he lost in the fire.

The community was full of praise for the St. Lucia Fire Service with one resident commending them for their prompt response and persistence in preventing the fire from spreading to other homes.