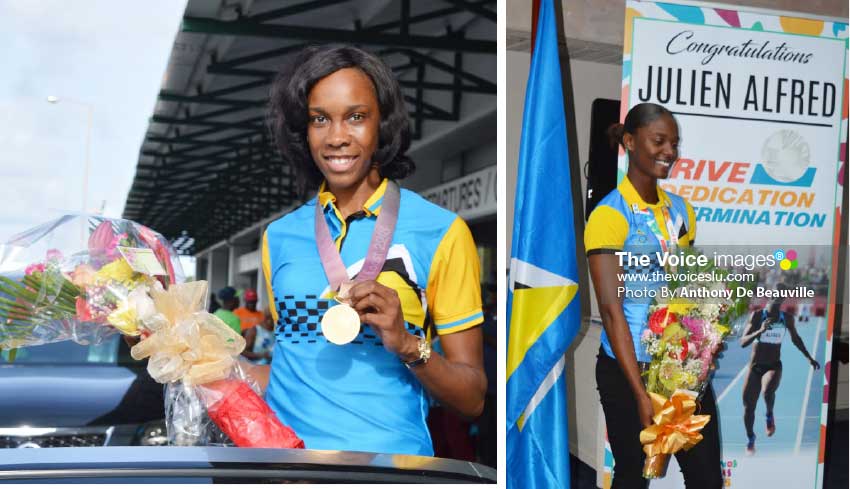 The Saint Lucia Athletic Association has taken the lead ahead of a number of National Sports Federations (NSF) as it names its quartet for top honours at the Annual National Sports Awards scheduled for some time in February 2019.

On the heels of distributing glad tidings to a number of senior citizens within her community (Cocoa Babonneau) the Caribbean’s leading high jumper; Levern Spencer will be eying a record 15th title as Saint Lucia’s Sportswoman of the Year.

After missing most of 2017 due to injury, the 34 year old Spencer started 2018 in fine form; in April, she captured Saint Lucia’s first-ever gold medal at the Commonwealth Games, when she cleared 1.95 metres in Gold Coast, Australia.

This was no fluke as the two titles, each of which she had won three times in a row, came within a week of each other.

In September, representing the Americas, Spencer cleared a height of 1.93 meters to win the bronze medal at the IAAF Continental Cup in Ostrava, the Czech Republic.

Her outstanding performance for 2018 speaks volume; she cleared 1.90 metres or better 12 times, and attained her second-best all time height, 1.96 metres, which also ranked as the eighth-best height outdoors for 2018.

2nd nominee Youth Olympics Games 2018 silver medallist in the women’s 100 metres, Julien Alfred, has been named Junior Female Athlete of the Year. She kick start her season on January 20th, running the 400 metres in a time of 59.36 seconds in Spanish Town (Jamaica). On March 24th in the 4×100 Metres Relay she run a time of 45.92 seconds.

At the Digicel Central Championships, in the 100 metres she stopped the clock in a time of 11.98 seconds to win the gold medal.

In March, Alfred made the finals of the CARIFTA Games in Nassau, the Bahamas; in October she went on to seal it off at the Youth Olympics Games in Buenos Aires, Argentina capturing the silver medal for Saint Lucia in a time of 11.23 seconds.

Alfred will be heading to the University of Texas where she will continue her education and at the same time represent her University as various USA championships.

It must be noted, Alfred is the current junior/senior female athlete for the year 2017

3rd nominee, Shelton St. Rose is Junior Male Athlete of the Year for 2018. St. Rose competed for Saint Lucia at the CARIFTA Games in the Bahamas, was fourth in the Hampton Games in Trinidad and Tobago, won the Windward Islands School Games gold medal, and then finished fifth overall, a fine performance in the men’s 100 metres at the Youth Olympics.

4th nominee, It was no surprise as Albert Reynolds is Saint Lucia’s Senior Male Athlete of the Year for 2018. The national record holder for the men’s javelin throw, he made the Commonwealth Games finals, Gold Coast, Australia in April and then won the French National Championships in July.

According to the SLAA, they are confident of making a clean sweep at this year’s awards, not in terms of winning Association of the Year, but the four nominees they have presented to the Department of Youth Development and Sports.