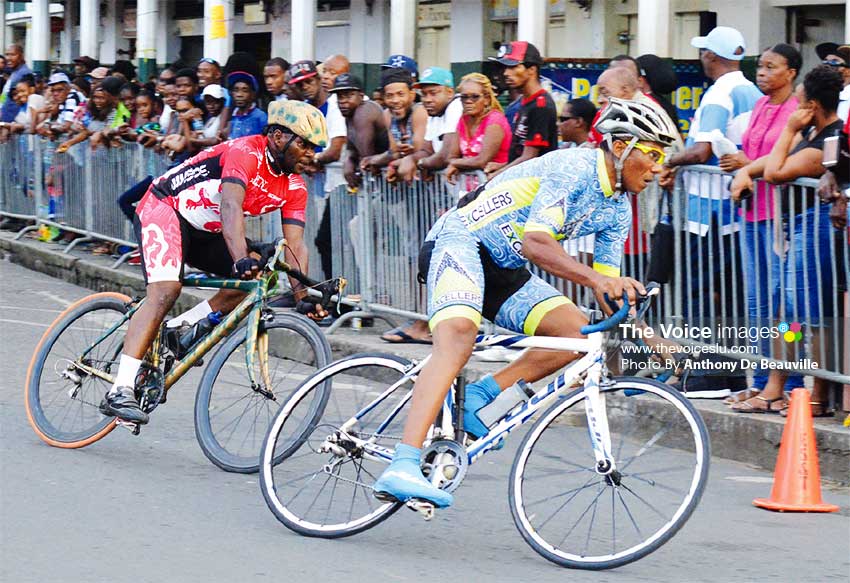 It was not the usual cycling spark and crowd like years gone by, but the six races staged by the Saint Lucia Cycling Association in collaboration with the Castries Constituencies Council (CCC) was just one of the major sporting highlights in the City.

The final event, a 15 lap, was a class act just before the heavens opened; with the likes of World Youth Cycling Championship participant Klivert Mitchell in the mix, Jesse Mentor, Fidel Esnard, Winston Williams, Michael Jordon and Elvis Joseph there was quite a bit to cheer about after every lap.

The afternoon also saw a number of young aspiring cyclists in action competing in 1 and 2 lap events; the BMX riders were not to be outdone as they too blazed the track in a five lap contest.

Following the event the VOICE spoke to Saint Lucia Cycling Association President, Cyril Mangal about the National Day event, his plans for 2019 and much more. This is what he had to say.

“It could be better; it went out reasonably well, especially with the public support.  We in the Saint Lucia Cycling Association have to do a bit more to get more cyclists involved in it”.

“We had a Cuban coach for the last two years, at present we are without a coach. The development we had is not what it used to be before.   For this event we had riders from Sarrot, Dennery, Mon Repos, Castries and its environs. There is still a lot more for the sport of cycling. At present we are scratching the surface, but one of the things the SLCA really want to go at is the Grassroots level to bring the sport back to its glory day.”

In terms of safe environment for training, we have written to the Commissioner of the Royal Saint Lucia Police Force (RSLPF) and hopefully we should get the permission to use the perimeter around the Dereck Walcott Square on a Sunday afternoon between 3.00 p.m. to 5.00 p.m.  for a developmental  programme for 14 and Under boys and girls. We have the support of the Saint Lucia Olympic Committee (SLOC) and the National Lottery Authority (NSL).

SLCA plans for 2019 – Mangal said, “We have to elect a new executive and that is scheduled to take place between January and March. In terms of events, we started well, but after August we didn’t have many races. One of the issues for the SLCA is the cost of hosting races. The CCC were the ones that mobilized the police, but sometimes the Police see events like these as special duties and it comes with a cost. We have made a request since we don’t have a facility for an allocation. Just to get a stable calendar is an issue.  There are times the Police would charge $800.00 and we believe an allocation of $20,000 annually is not unreasonable for the SLCA to secure the City Circuit. We plan to focus on the younger cyclist/Grassroots level.”

Talking about a venue to have events, it was only on Wednesday 11th December, Saint Lucia Prime Minister, Allen Chastanet in a Motion for consideration  moved that Parliament authorises the Minister of Finance to borrow the sum of EC$24,300.000.00 to finance the National Sports Infrastructure Strategy and Action Plan. Now you would have also heard about Sports Consultant Don Lockerbie and Government plans to change the sporting landscape of Saint Lucia. Any idea whether SLCA will benefit in terms of a Velodrome?

Mangal said, “A sports media personality recently asked the Sports Consultant the question about a Velodrome for Saint Lucia and the response was, “if you don’t think big go home” I was very disappointed in that statement. The very first time the SLCA met with Don Lockerbie was at a meeting at the Department of Youth Development and Sports.  I did send an email/proposal to him about a Velodrome and a BMX Track. We have a BMX Stack Gate in Saint Lucia for over four years; we have paid rent on it. We have had no success;

We have met with the Minister of Youth Development and Sports, Edmund Estaphane earlier in his term in office and discussed it, we haven’t had any further consultation, basically I am disappointed. This is one of the many issues affecting cycling in Saint Lucia.  A safe area. You can compete on the road, but you can also move in the BMX category. Klivert Mitchell was at the World Cycling Championship and is considered a sprinter.

According to Mangal, “The SLCA had someone comedown to Saint Lucia to look at various areas and proposals for a track. On completion it was sent to Don Lockerbie; we have not received a response since then. I don’t know what policy the government has in terms of that. We are very disappointed, we have been crying for a very long time. I don’t know if the Department of Youth Development and Sports focuses on mass. Our stand point, maybe we are  not a major sporting organization.  The ministry seems to concentrate on the mass events such as athletics, football, netball, volleyball when you look at the various infrastructure.  The SLOC is helping us, but when it comes to facilities and being able to implement the grassroots programmes that’s where the problem lies.”

Just under two years for Tokyo, Japan Summer Olympics, How much you intend to work with the SLOC to ensure someone like Klivert Mitchell represent Saint Lucia at the Olympics?

The SLCA Boss said, “In terms of qualification, it might be difficult at this time, Klivert is only 18 years old, and he can do well. The SLCA was trying a pathway for the Pan Am Games; I don’t think it’s possible. There is a lot of work to do, he needs to be exposed, he is one of the few discipline young cyclists we have.”

You mentioned earlier that SLCA election will be between January and March 2019. Are you considering going up for the Presidency again?

“If the affiliates want me to, why not. I have created a network, what aches me, you see a pathway where you could get help for your cyclists, but they need to come at a level to get through. I was recently elected as an executive member re the Francophone Cycling Union in France, likewise the Caribbean Cycling Federation. I also have a very good relationship with the President of the International Cycling Union and the Pan American Cycling Confederation. They are willing to assist, there is going to be a camp for the Pan Am Prep for cyclist qualified for the Pan Am Games in Cuba in May 2019.”