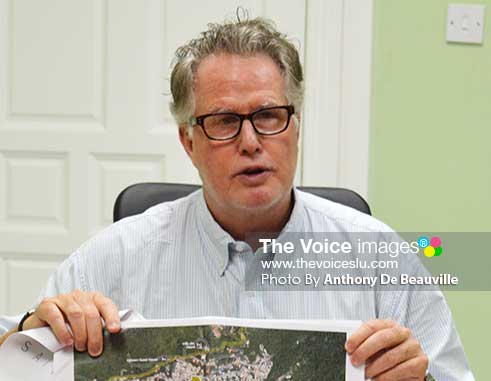 AS promised, the VOICE continues where it left off last week (Saturday 8th September 2018) to present to you, our loyal readers, the Question and Answer segment of Consultant Don Lockerbie’s presentation or Master Plan (as it is called with the media) as the Government of Saint Lucia looks to remedy or improve the many dilapidated sports facilities on the island.

VOICE: You mentioned earlier, just for clarification, in terms of the Soufriere phase; this fall and winter and where is the government of the day, getting the finance from?

Lockerbie: Our engineering team is already beginning the design for the 400 metre running track, fields and courts; therefore we will take it from concept to reality as from engineering drawings. We will get to about 75-80 % on our own while we are going through the selection process and when we pick the partner company, who would be the track surfacing or artificial turf company, they also will have their input, because they all have technical specification of what makes their surface work the best. Therefore, the last 25% is working with a selected company”.

Lockerbie: “Our goal would be by November to have all of that engineering work completed, pricing finalize, agreements made, contracts signed, so that construction can begin in November, which would mean completion in February – March/ April depending on the weather”.

Lockerbie: “We know cricket is being played at the mini stadium; we had to make a judgment call. We have met with the cricket authorities and the local folks and we have come to the agreement that a new cricket venue needs to be built and we have been looking at the Ruby Estate/ Banana plantation, just several hundred metres away from the mini stadium (Soufriere), where we will build an exclusive cricket ground”.

Lockerbie: “We also have been taking a serious look at the old and now no longer operable Copra Factory, particularly a very large indoor warehouse that we think would be a wonderful place to put a synthetic surface of some kind for indoor sports, but also for entertainment venues”.

Lockerbie: “This will give Soufriere, which we know to be a large Tourism destination. International football and athletics; domestic league, regional cricket and an indoor facility; we think that’s all to begin with and based on our final numbers in budget would focus on the mini stadium, we will also focus on development of the cricket ground and then we will develop courts and a swimming pool for Soufriere.

VOICE: Interestingly you mention Micoud North/South – in terms of community grounds/swimming pool, Dennery South – cricket and football; you talk about the George Odlum Stadium/ you also mention that the Saint Lucia Swimming Association made a great presentation; you consider it to be the best you have ever seen. The South, you did not mention anything about a swimming pool for the south of the island, any particular reason?

Lockerbie: “I try to be clear, we will be Master Planning in every constituency, the question that I have as an independent sports consultant is. You look at the George Odlum Stadium, what would you do their? I have asked hundreds of people in the north and south of the island if you were to build a new national stadium. I was asked by the Prime Minister to look at the country with a blank sheet as if nothing existed. That’s what I do for the FIFA World Cup/Olympic Games and Cricket World Cup”.

Lockerbie: Would you build your national football and athletic stadium in that location if you had to start all over again? It’s a tricky question, because 90 percent of my me would say no, it’s in the wrong place, it’s too far away from the majority of the population, in that case I am a Master Planner, I am thinking for the next 20 or 30 years.

Lockerbie: You are to have a new international airport, which should get done in the next few years, the DSH Project, Pearl of the Caribbean seems to be on the way; I have met with the developers, the Pearl of the Caribbean is underway with new hotel, lots of jobs perhaps making a lot of Saint Lucia to move south, because they working in the Vieux Fort area.

Lockerbie: International airport is completed, so I ask you; Is the George Odlum Stadium in the right place? It is. If the international airport and Pearl of the Caribbean are completed and is full of life down there; because if I am on an international team, I want to fly in and five minutes later be at the stadium and have quite a few hotel options right there as well. It’s quite a major undertaking, but in the end it’s in the wrong location. What do we do with it?

Lockerbie: Surprisingly the running track, after the storms and all these years, is still in very good condition. Do we tear down the grand stands and build something minimal and still have a track and a football field? Of course. What if we come back and build what could be a national stadium on that location, so I say its study ready. We don’t have the answers yet, but we are certainly very seriously considering many options including if you didn’t keep the national stadium where would you keep it. One of the ideas is to move the National stadium and an entire sports national sports park to the Cul de Sac area where all roads lead.

VOICE: You mention this is real; in July of 2015; there was a Sod Turning Ceremony to erect a new national aquatic centre adjacent to the Daren Sammy Cricket Ground, we are now closing down on 2018, nothing has been done to date. How realistic is this Master Plan? Where is the government of the day getting the money to build/construct some of these projects that you mentioned?

VOICE: Governments of the day have issues, which- ever government is in office, they have problems in getting the money for sports in this country. If you look at the various Budgets/ Fiscal Expenditure over the years, sports has never ever been given its true treatment, now that you have a Master Plan for sports and you mention 30 years, I might be gone then. Where is government getting the money?

Lockerbie: “I am not the government”.

VOICE: I know you are not.

Lockerbie: “I have shaken the hands of the Ambassador of Taiwan”.

VOICE: You want to explain that to me.

Lockerbie: “I play golf with him”.

VOICE: You saying here, that the Taiwanese government will play a major role.

The VOICE newspaper of Tuesday 18th September will present Part 2 (The Questions and Answers segment in the Master Plan. The use of artificial turf at some of the facilities and the Saint Lucia climate)