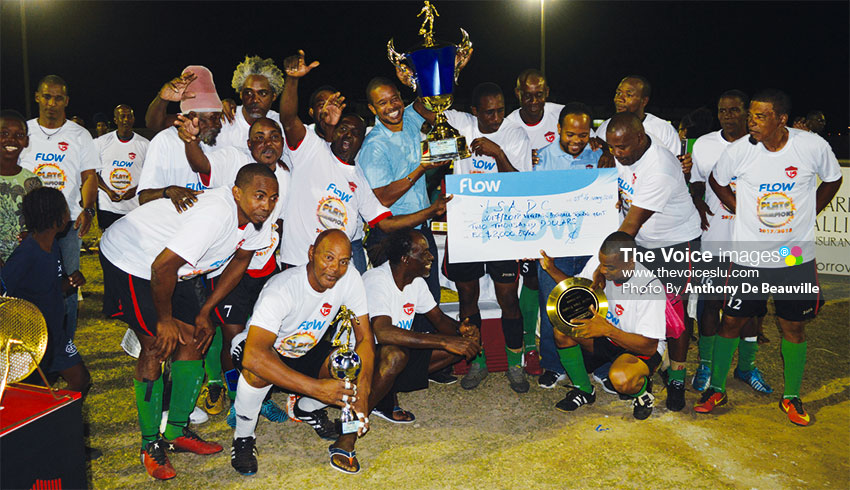 The deal was settled via a penalty shootout.

Earlier on the night, the third place playoff between Flow Lancers FC and Labowi Connexions also went down to the wire after the scores were locked at 1-1 after regulation and extra time.

The tournament’s fastest goal scorer Alvin Malaykhan was again in action when he put his team Caricom Masters ahead in the 22nd minute, shooting one past Stanley Lesporis. CM remained focused and so, too, VSADC.

Sixteen minutes later it was all even, as Sean Kirton equalized for VSADC after a save from a shot from another VSADC player which came off Caricom Masters’ goalkeeper Elbert Fredrick only for Kirton to shoot home and allow both teams to go back into the dressing room with the score 1-1.

The resumption of the game saw both teams up the tempo, but with several scoring attempts and good ball skills from the yesteryear players, both custodians were equal to the task as the scores remained the same at the end of regulation, plus 20 minutes of extra time.

In the penalty shootout, VSADC went on to prevail 3-2.

Meanwhile, newly-formed team Labowi Connexions became the first team in the history of the tournament to go through the qualifiers and lift the third place Flow Plate Championship as they defeated Flow Lancers FC 3-2 in a penalty shootout.

After holding close to the majority of the ball possession in this game, Flow Lancers FC failed to capitalize on at least 14 scoring opportunities presented to them and as a result at the end of regulation and extra time, the teams were deadlocked at 1-1.

Claudius Amedee put Flow Lancers FC ahead in the 6th minute, while Gilroy George found the much-deserved equalizer for LabowiConnextions in the 12th minute.

In the breath-taking penalty shootout, Flow Lancers FC had one penalty shot left and the score 3-2, in favour of LC. It was a nail-biting moment for LC supporters including the players on the pitch, but it was all left for LC goalkeeper Alvin Etienne between the uprights. Etienne looked calm and focused as the FLOW Lancers FC player walked up to the penalty spot took a right foot shot that was brilliantly saved by Etienne diving to his left to secure Labowi Connexions’ historic third place silverware.

In other awards, Stanley Lesporis (VSADC) was voted player of the final, while Alvin Malaykhan (Caricom Masters), Guy Jn. Baptiste and Benjamin Gabriel (VSADC) tied for the players with the most goals (three) in the plate championship.